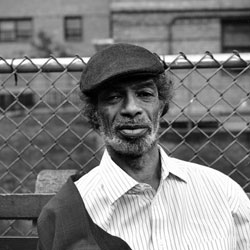 As recently as 2007, Gil Scott-Heron was serving time at Rikers IslandPenitentiary, New York, for cocaine possession. Now, three years later, hepresides over an audience that’s crammed into a neo-classical London courtyard and an audience is hanging on his every word.

This relatively swift turnaround in fortune can be attributed to the deepreserves of goodwill upon which Scott-Heron continues to rely. Not for nothingdoes he get the most enthusiastic shout-out on LCD Soundsystem‘s LosingMy Edge (“Gil! Scott!! HERRRROOONNN!!!” bellows James Murphy), and he’s still spoken about with hushed reverence by those who refer to him(without too much exaggeration) as ‘The Godfather of Rap’.

Scott-Heron’s newly-found good fortune doesn’t appear to have goneunappreciated by the man himself. He’s in fine spirits this evening,entertaining the audience with a series of quips and anecdotes, one of whichconcerns the etymology of the word “jazz” (a fusion of the words “jizzum” and”ass” he claims, perhaps apocryphally).

His voice is a remarkable instrument that’s improved with age. It’s aswarming as burlap, and comfortably covers all four corners of the Somerset Housequad. Following a long spoken preamble, he sits to sing two songs with only hisRhodes piano for accompaniment – Blue Collar (from 1982’s Moving Target) and1974’s desolate Winter In America.

Even so, it would be asking a lot of Scott-Heron to play a concert of thissize by himself. He’s joined eventually by a band and that, unfortunately, iswhere the gig begins to unravel. It’s as if the set is designed to reflect theself-sabotage that’s blighted much of the last 20 years of Scott-Heron’scareer. First, the (admittedly fine) backing singer Kim Marsh is given her ownsolo spot, and then a lengthy jazz instrumental threatens to kill all momentumat around the two-thirds mark. Unsurprisingly, audience members begin to streamto the bars en masse.

Indeed, the set list as a whole seems oddly chosen, resembling an iPodshuffle selection of Gil Scott-Heron tracks. There’s only one song from 1971’sclassic Pieces Of A Man (the title track) and, perhaps stranger still, only asolitary selection from this year’s warmly-received comeback album I’m NewHere.

Fortunately, an up-tempo The Bottle and the lovely Better Days Ahead ensurethe evening ends on a high note. Ultimately, Gil Scott-Heron’s charisma remainsstrong enough to survive this patchy and frequently frustrating evening. Ifbizarre song selections and dubious musical choices are what audiences mustendure in order to see this genuine legend on stage in 2010, then it’s a priceworth paying.