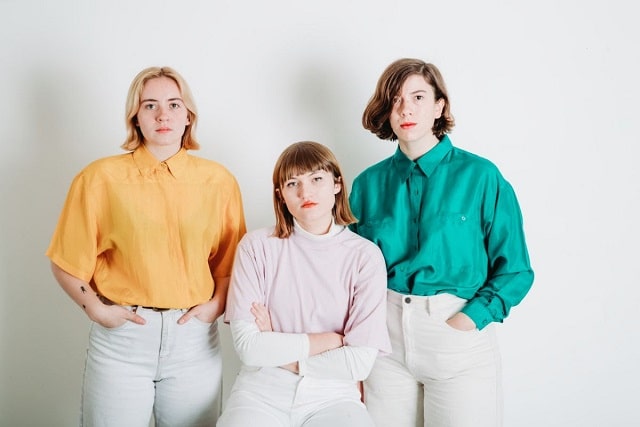 To set the appropriate mood as we wait for the headliners, there are two palm trees taking up centre stage behind the microphone stands, casting their unflinching bruise coloured shadows against the diffused pink screen that’s taking up most of the back wall. Upon closer inspection, they’re quite meagre and reedy saplings, obviously transplanted from healthier climes, but the effect, of a late summer Mediterranean sunset is pleasantly charming enough. Just above them to stage left, a smoke machine is busying itself, slowly drowning the poor shrubs in voluminous clouds of dry ice and mystique. Is it some judiciously considered evaluation of artificiality and nostalgic sentiment in the modern age playing out, or just a pretty picture, it’s hard to tell.

Dressed all in white, sporting tracksuits and hoodies with the band name splashed across the front; here are Girl Ray ready to bring some bittersweet sunshine on a cloudy and damp February night. Nominally a trio, they’ve fleshed out to a quintet for the live arena and are filled with vigour and what with their Club Tropicana set up and the gung ho Club 18-30 enthusiasm versus the damply oppressive and distinctly atmosphere-draining weather we’re having right now, initial thoughts are that this is going to be a tough night to get through.

Miraculously, it seems that the boy girl duo who’ve been added to the touring ranks have done something unexpected. On the two records released thus far, Girl Ray’s lead vocalist Poppy Hankin has displayed a slightly monotone voice, with her plummy exhalations unnervingly reminiscent of Hull’s very own Glum Goddess Tracey Thorn. Thankfully that morose husky tone was missing tonight. The transformation as distinct as night and day, it wasn’t just her heart that found itself amplified, it was the entire set.

Their debut album, named after a type of teabag, Earl Grey was filled with songs that were all wilfully earnest parables of unrequited passion, played appropriately out of tune and drenched in reverb, as is to be expected from any of the multitude of substandard twee femme trios you find spotted across the cultural climate these days. Perhaps realising they were at risk of being pigeonholed by their own wistfulness, they chose to take inspiration from Ariana Grande and her ilk of effervescent sun kissed princesses, adopting a more glossy approach for their sophomore release, Girl.

Its hard to spot the musical connections to Ms. Grande, as the band now sounds more like the aforementioned miserablist Thorn’s post punk girl group Marine Girls and the mighty Haircut 100 than anything else. Bass lines are now slippier than awkward teenage hands giving factor 50 backrubs, drum beats throb harder than speedos at wet t-shirt contests and the backing vocals go down smoother than a hundred shots of sangria at dusk. The keyboards they added to the mix sound as if they’re about to break out into anthemic italo disco at any moment, and hands are going up sunwards in the crowd.

They pretty much dispense with playing any of their older numbers, instead choosing to run with this new tropical vibe, and it does them good, bringing colour to their cheeks. They show off a little, doing dorky guitar battles, acting like holiday reps getting the crowd to begin clap-alongs that go nowhere and they even play a rare cover, a Cambodian ballad that Haskin heard on holiday, that showcases yet another new destination for them to explore. It may all have been a fever dream but it’s done the band, and by extension the rest of us, a world of good to find a place in the sun.