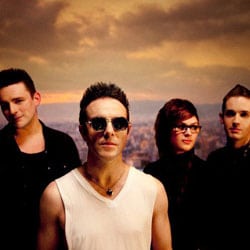 A gig featuring just three new songs, this wasn’t Glasvegas touting their soon-to-be-released second album Euphoric /// Heartbreak \. It was more a reminder of who they were and the sending of a signal to let us know that they’re on their way back.

Their arrival on stage is soundtracked by the impending doom of Beethoven’s Moonlight Sonata (the same piece that accompanies Stabbed, the spoken-word tale of fearful misery on their self-titled debut album). It’s a reminder of why it’s hard to pinpoint what made these Glaswegians one of 2008’s breakthrough bands. With a mood this gloomy, they’re not necessarily a band you’d expect to sell over 300,000 copies of their debut.

But perhaps things have changed. Check out the titles of the three new songs that do get an outing tonight. There’s set opener The World Is Yours, recent single Euphoria On My Mind and James Allan singing “celebrate the future, forget the past” on the optimistic Shine Like Stars. It may all be misleading, but what we can draw from them is that with the recruitment of super-producer Flood comes scale and magnitude. Their new manifesto is bigger, bolder and more aligned with the stadium rock they’ve found themselves in close proximity to in the last couple of years.

The rest of the set is from the past. Despite Alan McGee’s support, these pain-soured anthems make them closer to a simplified Spiritualised than a tormented Oasis. With that comparison in mind, a huge orchestra and choir could provide for some wonderful arrangements of these songs. Without that, the simple, at times unimaginative, melodies make for fantastic singalongs but get lost under the fuzzy guitar and it becomes increasingly difficult to make out what James Allan is singing.

He seems keen on attaining icon status, full of swagger, his impossibly strong accent never letting us forget where he’s from. He pauses at the front of the stage in his white trousers and wifebeater combination, arms raised, armpits on show, looking out over the crowded club through his ever present shades. Perhaps encouraged by their tours supporting the likes of U2 in the last couple of years, the ambition to be rock stars is evident.

Tonight also marks the London debut of their new drummer, with Jonna Löfgren assuming the position vacated by Caroline McKay as the only female member of the four-piece. Also drumming from a standing position, you have to wonder if she was told it was a requisite at the job interview. But she doesn’t put a drumstick wrong and fits in perfectly.

They play their version of Be My Baby, an acquiescience of the debt they owe to Phil Spector and his wall of sound production technique that overwhelms too many of their songs, often muddying Allan’s vocals and merging the songs together without letting them retain their individuality.

As Allan sits down at the front of the stage to end the night with Daddy’s Gone, its clipped sensitivity is a demonstration of how affecting this band can be. However, tonight’s gig doesn’t reveal enough of their future. They’ll be touring again in April and May after the album’s release, and surely then they’ll be ready to play more of the new material. It’ll be telling to see whether their stadium direction in sound will necessarily involve them losing their identity as Glasgow’s underdogs, or whether they’ll be able to combine it with the success that they crave.