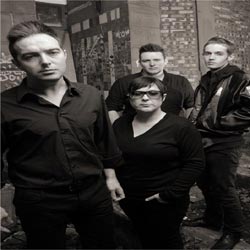 Yet here we stand at the end of 2008, with Glasvegas having one of the biggest selling albums of the year and some of the most memorable festival appearances, and rounding off the year with a series of gigs and a Christmas mini-album with distinctively unseasonal track titles like Fuck You It’s Over.

The minute James Allan and his three bandmates walk onto stage though, it’s easy to see why they’ve been so fiercely adopted by the nation’s indie kids (and not just kids – the age range in the Plug is surprisingly broad, from pre-teen children up to 50somethings glancing nervously at the mosh pit). An awesome barrage of sound is unleashed, helped in no small way by the stand-up drumming of Caroline McKay.

The chemistry between the four is obvious – from McKay smacking the hell out of her drums to guitarist Rab Allan and bassist Paul Donoghue skipping around Allan’s near static presence. There’s not much banter with the audience, but this was a crowd who wanted to pogo and sing along, not be chatted to.

The anthemic qualities of Allan’s songs mean they’ve attracted the beer-throwing, football-chanting element who spend their time between songs lustfully belting out cries of “Yoooorkshire, Yoooorkshire”, but it’s the frailer, vunerable qualities of Glasvegas that shine through, such as the snatch of You Are My Sunshine at the end of the closing Flowers And Football Tops, almost croaked out by Allan as if his heart was on the verge of breaking.

The setlist more or less remained the same one that saw them power through those festival spots and onto the Autumn. The highlights from the album, including an ecstatically received Geraldine, were greeted like old friends, but it was the tracks from that Christmas album that showed just what a great songwriter Allan is becoming.

The aforementioned Fuck You It’s Over is just blistering, an angry pay-off to an ex-partner, but Please Come Back Home is possibly the highlight of the night, bottling up a lifetime of yearning and longing under a barrage of feedback. If this is what we have to look forward to with Glasvegas’ second album, then we could be in for something pretty special.

It was the old favourites that caused the most amount of frenzy though – the massed chants of “here we fucking go” during Go Square Go and the raised fists punching the air to the enormous sound of It’s My Own Cheating Heart That Makes Me Cry. In fact the only lull in proceedings was the brooding, downtempo Ice Cream Van.

For an encore, we were treated to the somewhat surreal sight of hundreds of Yorkshiremen singing (in a Scottish accent, of course) “forget your da’, he’s gone” while pointing their fingers at James Allan. To be fair, he didn’t seem too upset, blowing kisses at the audience, beating his heart with his fist and pronouncing Sheffield to be “fuckin’ awesome, as ever”.

It was the perfect summation of Glasvegas themselves – a moment that, despite having its roots in trauma, became inspirational and life-affirming. It will be intriguing to see what 2009 delivers for them.