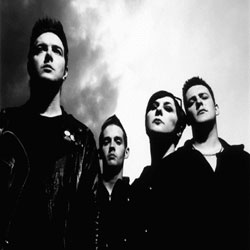 Anyone who’s got their hands on Glasvegas’ much-lauded debut album will know that the wall of guitar noise that introduces the opener, Flowers And Football Tops, sounds like some sort of life-affirming call-to-arms, a fanfare for this Glaswegian four-piece’s rather magical brand of sky-scraping indie rock.

And so it was live, Glasvegas bounding onto the stage to what sounded like ten thousand layers of guitar, and 500 Bristolians maniacally chanting “Here we fucking go!” – the refrain from album track Go Square Go.

The crowd were right to be expectant. For in this church-cum-gig venue (a fitting setting for Glasvegas’ semi-spiritual music), Glasvegas would play out of their skin and sculpt a powerful, brooding set of soaring melodies and passionate songs.

The fantastic single, Geraldine, predictably frenzied the crowd, the band tearing through its throbbing pop noir with an almost deafening ferocity as guitarist Rab Allan traversed the length of the stage to kiss bass player Paul Donoghue. Contrived? Debatable. Fitting of the moment? Definitely. Here we have a band whose rise in the last two months has been near-unprecedented; moments like this must be special.

Onto standout album track Go Square Go, which is already proving to be a live favourite. James Allan hands vocal duties to the crowd, who duly oblige, chanting “Here we fucking go”. There’s something truly ironic about 500 people chanting such a refrain with spiritualesque zeal in the middle of a 19th century church. Allan reclaimed vocal responsibilities, repeating the chant, and sending the crowd barmy. “That was fucking angelic,” he remarked at the song’s end. Weirdly, he wasn’t wrong.

Generally though, his words were few, his movements slight. As his band thrashed their instruments and threw themselves around the stage behind him, Allan was busy being a shit-hot frontman. Fashioning an image that at times strays a little too close to shit-Morrissey enthusiast, he manages to pull it off. Live, his voice dominates. He was note-perfect all night, even better than on record, the power behind his voice truly awesome and enveloping.

The set-closer was Daddy’s Gone. Now, again, there’s something marginally comical about 500 Bristolians singing the chorus to Daddy’s Gone in a Scots accent, but it happened when Allan handed the crowd the vocal duty for the second time. It was brilliantly delivered.

Bristol is probably the furthest point from Glasgow on Glasvegas’ tour, but you wouldn’t have known it. Throughout the gig, Scottish flags were waved, hands were raised; chants were, well, chanted with a cultish reverence. Glasvegas were like a giant, the crowd parasitically dependent on them as if their very lives depended on it. That their debut album has been out for less than one week makes this all the more remarkable.

The end of the set saw Scottish flags thrown on stage, which James Allan hung around to unfurl long after his band had ambled off stage. Having cheerfully thrown the flags back into the rampant crowd he stood, hands on heart, evidently affected by the beauty of what he had created.

Musically air-tight, and with a delivery that induces goosebumps, Glasvegas are a band who have to be seen in a live context to be properly understood. The atmosphere they create, the power with which the play their songs, their humble yet formidable presence is inspiring. This is the start of something big.