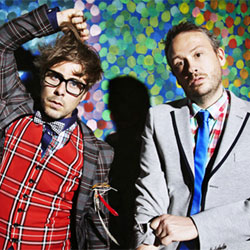 Now in its seventh year, Global Gathering is one of Europe’s largest dance festivals. To say this year’s festival had a few hiccups is an understatement, and here’s a tip for next term: don’t bring any glass bottles. Not only will it shorten the two hour campsite security checkpoint to pass, you won’t have wasted your cash in order tore-purchase it inside at triple the price.

With proceedings starting at 5pm (if you had made it through security), it was discerning to find we were pitching on plains of stinking gunge, as a result of the freak flooding which hit the country.

Friday afternoon was also off to a slow start following sound difficulties on a few of the stages, with again there were queues to enter the arena. An hour late, Mercury Prize nominated New Young Pony Club take to the stage. The induction of so-called new rave bands has made little difference to the Gathering’s dance and drum n’ bass clientele, with little more than a handful of punters watching politely. Nevertheless, front woman, Tahita Bulmer’s energy refused to wane and the band pleased the few who showed up.

Stanton Warriors hectic tour schedule didn’t stop them delivering any lower octane breaks, drawing a much bigger crowd. Carl Cox in broad daylight on the main stage was an experience to say the least as he took a trip from his early ’90s catalogue up to this years Got What You Paid 4!

Surely we could count on Faithless to get the crowd going? As the anticipation built, Insomnia kicked in, but was the crowd ready for it so soon? It was over with the click of a finger and after a few songs people began to leave feeling deprived. The only person to profit was the trader scouting the crowds shouting, “pills, pills, pills.”

Time for Erol Alkan. With a huge tent only half full, a muted PA and mud so thick that you’d be better off raving in a wheel chair, dancing was not on the cards. It was left to 2 Many DJs to end the night with a bang with their usual array of remixes and mashups from the Prodigy to Nirvana.

Saturday afternoon graced us with impressive military aerobatics by the Red Arrows flying across the airfield in aesthetically pleasing synchronised shapes. Again, the new rave vibe of the festival did not really come to pass as Klaxons failed to show up to DJ. The festival was much busier and muddier. First off was Grooverider, who had some mistaking them for Pendulum as they mixed one of their singles.

Not surprising as again today the schedule is delayed fuelling confusion. Steve Angelo and Seb Ingrosso thrilled crowds with RUN DMC‘s It’s Like That, wearing the t-shirt to go with it, as well as some Daft Punk. Their collaboration worked well, creating the atmosphere needed to energise crowds in such a dismal climate.

Despite the cold and the rain, Basement Jaxx were undoubtedly the best of the headliners of the festival. A few songs in, and, Oh My Gosh has the crowd going mad. This was followed by a slow version of Romeo, which seemed to tie in with the weather, though not perhaps the rave. Later, bright tutu wearing guest singer, Charlene Hector bounces on stage to sing, The Bottle with all her valour.

Finally we have an almost too full tent for drum n bass stalwart Andy C. There was more spirit coming from those assorted, despite being bonded to the ground. Renowned for always doing something new, along numerous remixes per show, as seen today, you never get tired of him.

With such a remarkable line-up, one might have expected nothing less than a fantastic dance festival. However it was littered with pitfalls: long queues for entry, food, cash, toilets. If the weather has taken a turn for the worse there was nowhere to seek shelter and wellies were the best you could do.

There were no announcements about the delayed acts. Yet, with nothing but the world’s top performers at the Gathering, getting to see all your favourites was a task in itself.

After last year’s near-deafening experience, the organisers were forced to limit the decibel levels on all stages. Either we’re all hard of hearing from last year, or the PAs have been taken down too far, to the point of sounding no more than background music.

For these reasons, and the fact that it never sold out, the festival lacked atmosphere and 110 for two days seemed steep. We certainly got our money’s worth in terms of artists, but there was just not enough time to see them all. Had it been spread over three days, it may have been a different story.