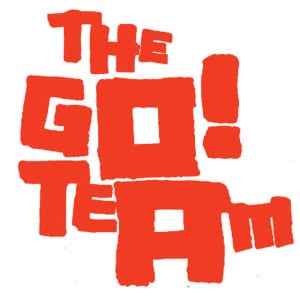 One of the best things about music can be the sudden feeling of being overwhelmed, overloaded or enjoyably saturated by what you’re listening to. Whether it’s the unyielding addiction to one particular track, gorging on back-to-back bands at a festival, falling deep into the back catalogue of an artist or submitting helplessly to the joys of a new album there’s something about it that remains a uniquely thrilling proposition.

It’s a trait that has appeared throughout the history of The Go! Team both in terms of their live shows and recorded albums and is especially applicable to latest album The Scene Between. Whereas some of their earler albums may have achieved this sensation through the sheer high-impact, high-energy sounds that burst forth, their fourth album sees them take a different approach that arguably delivers the strongest set of results yet.

For The Scene Between Ian Parton (essentially the driving force and songwriter behind The Go! Team) made the conscious decision to focus specifically on melody and song, recruiting a range of female artists to contribute vocals in the process. There can’t be any doubting how successful he’s been in turning ideas into reality – it’s an album of melody-rich, technicolour power-pop (which makes their headlining of the last night of this year’s Indietracks festival make total sense).

Village Underground is the perfect venue for them tonight in London – intimate and compact enough to help them harness the power of a sold-out crowd (not that they really need it). The early appearance in the set of the title track from The Scene Between and Waking The Jetstream, both all towering pop magnificence, ensure the show begins at breakneck pace. As if that’s not enough they also throw in a couple of songs from their debut album Thunder, Lightning, Strike – The Power Is On and Huddle Formation both offering a reminder of the propelling vibrancy and perpetual youthfulness of that record.

At the start of the show Ninja (still the unchallenged focal point of their live shows) promises tracks from all four albums and they deliver (even throwing in a new song, She’s Got Guns, along the way for good measure). The sheer energy they exert is striking, the co-ordinated on stage jumps, blurs of collective movement, interchanging of instruments and Ninja’s direct crowd engagement all coming together to heady effect (and causing several instances of mass-arm waving amongst the crowd).

They’re markedly a different band when Ninja is on lead vocals – the smash of adrenaline of T.O.R.N.A.D.O shows the power and physicality of their sound with the almost chaotically buzzing Grip Like A Vice and Keys To The City not too far behind (it’s during these moments when even the Village Underground sound system seems close to giving out). They close with the sunshine-pop-on-steroids of The Art Of Getting By before returning for an encore of Buy Nothing Day and Apollo Throwdown (the former all sublime melody within the euphoric guitars, the latter all swagger and style). Both musically and visually there’s something brilliantly excessive about them yet it feels very natural and completely works. Let’s hope they never stop overwhelming us.