by Stephanie Flooks
published: 7 May 2018 in Live Music Reviews
Tweet 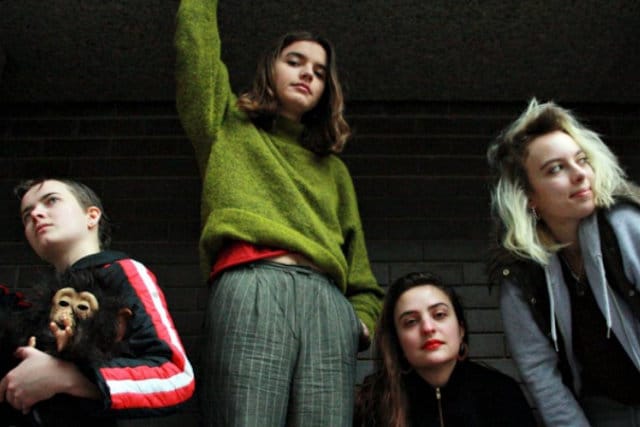 To celebrate the release of their eponymous debut album, Goat Girl were primed for a triumphant homecoming London show in late April. However, an unfortunate accident with a boiling kettle left drummer Rosy Bones needing hospital treatment, and the final few dates of the tour were postponed until May.

So here we are a few weeks later, at the Garage, the stage of which is adorned with weird papier-mâché masks and the titular Goat Girl. The band meander on stage as album opener Salty Sounds plays through the PA. Without further ado they launch into Burn The Stake. Vocalist and guitarist Clottie Cream stands fizzing with disdain as the song builds to its fevered climax. The violin, cleverly used on the album to push the band on from the classic garage band formation, is devastatingly effective live, adding further to a sense of danger, that this band’s devil-may-care attitude may tip over into something darker. It drawls its way into Creep, and there isn’t a woman here who doesn’t recognise the antagonist of this story, relating and echoing the chorus “I really want to smash your head in”.

Not ones for overt physicality on stage, preferring instead to let their music provide the main attraction, this band can seem almost aloof, but there’s no missing their grins as the first crowd surfer appears on the horizon. Cracker Drool is greeted with cheers, and the simmering violence of the song has everyone unwittingly dancing along, playing with mid-song tempo changes, like their contemporaries Hinds and The Big Moon, to keep the audience on their toes. It works brilliantly.

The set is almost seamless, hardly a breath between each song. Slowly Reclines, one of the standout tracks from the album, smoulders before lighting the touch paper for crowd favourites The Man With No Heart Or Brain and The Man, the latter a ridiculously catchy cross between early Kings Of Leon and The Bangles. It’s deceptively simple, and tonight it’s downright filthy.

Goat Girl aren’t here to conform, so after seven songs they leave the stage. There is a moment of confusion, then A Swamp Dog’s Tale plays out over the speakers, accompanied by animation; it’s just an interval, and the band return to raucous approval. I Don’t Care (Parts 1 and 2) are played back to back, but it’s clear that Goat Girl care very much. Each song might only be at most three minutes in length, but each one is filled with venom, and not a second is wasted in making their point. A glowering stripped back cover of Tomorrow from Bugsy Malone and debut single Country Sleaze close the show. The lights go on and the crowd is still shouting for more, but Goat Girl have vented their spleens for the evening.