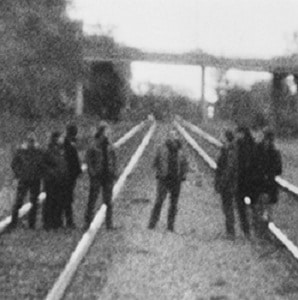 Although they have been recording and performing for a decade now, Dead Rat Orchestra may well be an unfamiliar act even to the most adventurous of Godspeed You! Black Emperor’s fanbase. The trio of Daniel Merrill, Robin Alderton and Nathanial Mann seem to operate in the shadows and at the margins, obviously well versed in folk music traditions but crafting a sound that is radical and hard to classify. It would be tempting to group them in with a wide range of musicians taking imaginative liberties with folk music and instrumentation – surprise Mercury nominee Sam Lee and the freely improvising Clang Sayne seem like loose kindred spirits.

This tantalisingly brief glimpse into their weird and wonderful world is a rare support set that could easily have been longer. The group’s peculiar approach to vocals and harmonising (incorporating all manner of yelps and gutteral projections) serves as an intriguing complement to Godspeed’s powerful prophecies. More unusual still is there beguiling and original instrumentation, which tonight includes a banjo, a thumb piano, and a harmonium. There is an occasional Middle-Eastern sound to the melodies as well as a celebratory spirit (particularly when they conclude by repeatedly chanting ‘with joy and sorrow in our hearts’). The effect is to raise expectations yet further for the return of Godspeed.

In some ways, it would be hard to pick faults with Godspeed’s well paced, carefullu orchestrated set. The rhetoric of apocalypse and political and moral decay, together with grainy, bleak projected imagery and a carefully orchestrated musical tempest remains potent if occasionally a little self-conscious. The passage of time has done little to alter the band’s approach – as always, they deploy only minimal lighting, emerging as largely concealed silhouettes against the stage. One of the band’s aims has seemed to be to remain as faceless as possible – a pure collective with little sense of individual identities, even if Efrim Manuel Menuck seems to serves as the group’s nominal leader.

In terms of their sound, here the characteristic elements also remain safely in check – the ominous drone passages, the incandescent, strafing guitar lines and the slow building sheets of noise. This time around, they seem to have enticed some curious new fans – the younger men (and it is mostly men) in this audience must have been about eight years old when Godspeed last put out an album.

After an absence of ten years, Godspeed ought to be returning with a refreshing burst of brutality and vigour but there are some nagging doubts about this recapitulation. Perhaps it is simply that familiarity breeds contempt – but with little discernible development in their sound and approach, their music has begun to sound formulaic in its meticulously constructed drama. There now seems to be little room for improvisation or spontaneity in their pre-determined calamity.

Godspeed’s pieces take so long to unfold that even a generous live set can only skirt around their catalogue. Tonight misses the brooding, imposing monster of Storm from their magnum opus Lift Your Skinny Fists Like Antennas To Heaven (apparently performed the previous night) and instead focuses on the melancholy dread and doom of the Slow Riot For New Zero Kanada EP, which is delivered in its entirety. The slightly imbalanced focus exposes the shift towards more conventional approaches in their more recent music. The opening Hope Drone gives way to the distorted insistence of Mladic – its rather limited harmonic scope and repetitive attack perhaps suggestive of the banality of evil. The freshly minted Behemoth is better though. It is their longest piece to date – an epic and sweeping visceral assault that moves through a wider variety of moods, although most memorable for its pummeling drums. What is missing now perhaps is the dry desert blues that peppered their earlier material, as well as the sense that quieter, more spacious sounds can be just as chilling as battering ram theatrics.

Godspeed You! Black Emperor and Dead Rat Orchestra on Spotify