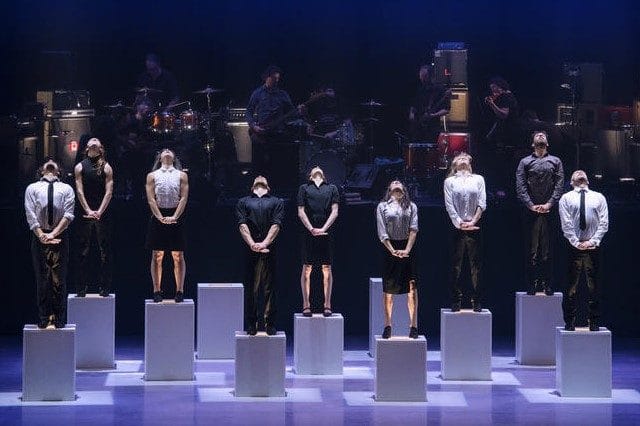 monumental by The Holy Body Tattoo with live soundtrack by Godspeed You! Black Emperor

Recent years have been a productive time for Canadian post-rock forefathers Godspeed You! Black Emperor. Since returning from a period of inactivity they’ve released three well-received albums that saw them consolidate their sound and focus on their strengths. Tonight saw them make their most adventurous move in a while as they provided the live soundtrack to monumental, a dance piece by Canadian outfit The Holy Body Tattoo.

The background to monumental stretches back to 2005 when Holy Body Tattoo first performed the piece while Godspeed were on hiatus (so recordings of their music were used instead). As the piece starts there are nine dancers position atop eleven white podiums, with Godspeed You! Black Emperor lurking in the background in front of projected visuals (of texts from artist Jenny Holzer). In terms of the band the main point of difference is the presence of an upright double bass. Otherwise, they’re typically elusive, shunning any limelight (at the end when the dancers take the applause of the crowd they point back to the space occupied by Godspeed while they were playing but they have long since left the stage)

The music mostly comes from their debut album F♯ A♯ ∞ and it quickly becomes apparent that there’s considerable shared, complimentary ground between band and the dance outfit tonight. The initial poses of the dancers indicate troubled minds, opening as if they have been bound. GY!BE open with wailing guitars and a strong sense of unease is immediately detectable. As if to reinforce this a text on the screen reads: “Some days you wake and immediately start to worry. Nothing in particular is wrong, it’s just the suspicion that foreces are aligning quietly and there will be trouble”

At times the music fades away and the performers dance without music, offering up chants and stamped feet which helps further increase the feeling of foreboding and disaffection (the shadows that stretch across the walls of the Barbican Hall add a suitably creepy layer). As the piece progresses it is clear there is a wordless narrative at play, all escalating tension and dystopian alienation. In this sense the dancers accurately portray the f’d up, complex modern world that Godspeed both exist within and amplify. East Hastings soundtracks a particularly dark episode, with suffering, pain and self-harm all present within the dancing, the performers throwing themselves on ground, seemingly in an attempt to rid themselves of possessing forces. The onset of stark drumming sees a match in the increasingly twisted and contorted shapes of the figures on stage.

Then, suddenly there’s a moment when the dancers seem to find some sort of release and celebrate wildly on stage. One rather impressively dives along the floor on his stomach, his head held high, others whoop and punch the air. Yet, it doesn’t last long, a small blip in the downward trajectory. A dramatic climax sees intense fighting, the dancers emboldened as they wrestle with their dark psyches, hinting at almost ritualistic acts. The music is at its most raw and visceral and it’s clear the figures are existing in some sort of post-apocalyptic landscape. The voice heard at the start of Dead Flag Blues plays out as some dancers rise from the floor and use torches to survey the destruction around them. A quote on the backdrop talks appropriately of a civil war of the mind. It helps draw to a close a deranged, disquietingly bleak yet utterly enthralling show.