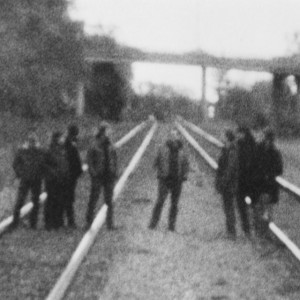 It’s probably fair to say that 95% of listeners would struggle to engage with Godspeed You! Black Emperor’s uniquely challenging brand of music. In defence of the majority, sprawling, 25 minute long slabs of molten noise that somehow manage to merge modern classical, folk, heavy metal, industrial and progressive rock – often simultaneously – are not exactly the stuff of Radio 2 playlists. Yet to those who ‘get it’, the Montreal collective are performers of rare brilliance, commanding almost slavish devotion, as this sold out show demonstrated.

After an intriguing support act (Xylouris White, a genre mangling collaboration between Greek lute player George Xylouris and Dirty Three drummer Jim White) an ominous electronic drone hums around the packed arena for several minutes in anticipation of the main act arriving on stage. When they do, as usual it’s with zero fanfare or interaction; instead Sophie Trudeau’s violin and Thierry Amar’s double bass slowly but surely build up the atmosphere before the gargantuan guitars and drums of the full band break forth with volcanic force.

Following a 10-year studio hiatus in the wake of 2002’s Yanqui U.X.O album, Godspeed returned in 2012 with ‘Allelujah! Don’t Bend! Ascend! – which showed they had lost none of their ability to come up with bewildering titles as well as extraordinarily powerful music – before waiting just a mere three years to come up with their latest record, Asunder, Sweet and Other Distress. Most of the tonight’s show focuses on this more recent work, with nothing whatsoever from their first incarnation either side of the new millenium, which many fans still consider their halcyon period.

Whatever your thoughts on the respective merits of their back catalogue, Godspeed certainly know how to give an audience their money’s worth. As well as the whole of the new Asunder, Sweet and Other Distress album from start to finish, we also get two entirely new compositions, which bookend a spellbinding Mladic, perhaps the highlight of the evening. A sombre meditation on the infamous Bosnian Serb general, subtle Balkan influences – notably Trudeau’s wonderfully evocative violin playing – adorn the otherwise fearsomely aggressive cacophony, with a visual backdrop of what may or may not be typewritten prison files. Godspeed’s music is largely wordless but it continues to be as explicitly political as you would expect from performers who are in several cases self-proclaimed anarchists. It’s therefore something of a surprise to see the word ‘hope’ projected on the giant screen behind them for the first 20 minutes – clearly not all is lost even in their bleak Quebecois world view.

At maximum volume, with two drummers pounding away like Mordor trolls and a trio of guitarists spitting out shards of febrile feedback, listening to Godspeed is like standing next to a rocket taking off. Yet as staggering as this vast sound is, they’re equally compelling in their quieter moments. Towards the end of the show, group leader Efrim Zenuck gently strokes the edges of a cymbal with a microphone to create barely perceptible shivers of static, while Trudeau’s violin is frequently beautiful; a post-rock Yehudi Menuhin who commands her instrument with great panache and sensitivity.

At times it seems like chaos reigns, but everything Godspeed do is meticulously crafted, with variations of mood and tempo like the movements of a symphony. The end result is a sonic experience so overwhelming that the audience at the Shepherd’s Bush Empire is reduced to a state of catatonic awe, and as this astonishing act silently depart the stage after two hours of relentless assault, you are left feeling emotionally drained yet with a strange residual sense of joy.