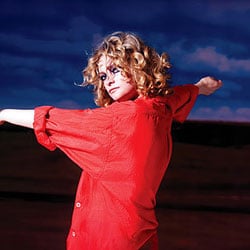 Bearing in mind the frequency with which Goldfrapp change musical tack (that frequency being once every time they release an album), people should’ve known to expect the unexpected when 1980s-influenced fifth album Head First arrived shimmying and dressed in spandex. It followed that this UK tour wouldn’t have the fans of the quiet, reflective side of the band brought out in 2008’s Seventh Tree in mind.

Support act Retro/Grade and their commercially-minded electro-pop, made it clear that the night was going to be aimed at those wanting a more dancefloor-centric night out. Currently in the process of building a profile ahead of releasing their debut album next year, they scaled their act down to a DJ set rather than a full performance, but the sound from behind their decks was entirely consumable. Ending with their remix of The Ting Tings‘ Hands, the scene was set for the rest of the evening.

The difficulty with Goldfrapp now is that after all of these new directions, there are a lot of different Goldfrapps, and everyone wants their own version tailored to their own tastes. It’s a well-worn clich that a musician’s favourite work is their most recent, and so tonight was a great gig for Head First fans. Those of us who found it a little weak despite its sass had to lump it as it played out almost in its entirety. During one section of the set, seven songs out of eight were from the new release. That’s when it feels you’re being flogged something. Having said that, each of the other four albums were represented, with an emphasis on the hip-swinging, bootie-shaking highlights like Black Cherry’s Train and Supernature’s Number One.

As for our leading lady, Alison Goldfrapp remains a formidable frontwoman. With Will Gregory not on the stage it was her job to represent the brand. A classically cool eccentric, her crowd interactions were limited. She sang superbly (of course), hair swept back by two powerful fans directed at her face.

Spending the main set billowing around the stage in a black glittery catsuit with extra black glitteriness in the shape of a shapeless cape, she changed outfit just the once, coming on for the encore dressed as a, well, no one was entirely sure. It was probably a Christmas decoration, or perhaps a cupcake. Either way it was eye-catching and certainly something you can only get away with if you’re on a big stage like this. Not one to wear for taking the bins out.

The introspection of debut Felt Mountain was left for the encore when it appeared in the form of its first track, Lovely Head. A treat to hear it live, its class and ingenuity bettered everything that had come before. Giving Alison the chance to pummel her vocal chords, the land of disco melted away for a few glorious minutes, replaced by a world where there was no mediocrity.