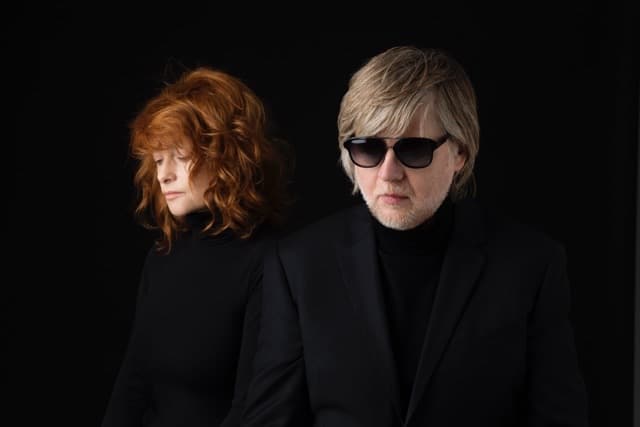 Goldfrapp: Alison Goldfrapp and Will Gregory

Oscillating between electropop and folktronica, with each new album seeming like something of a reinvention, each Goldfrapp tour stands out as different to the last. In interviews ahead of the release of the duo’s seventh album Silver Eye, singer Alison Goldfrapp casually mentioned touring the new songs alongside material from Black Cherry and Supernature, the albums representing Goldfrapp’s commercially most successful period. This was a pop-focused time characterised by beats, synths, horse heads and tails, and mentions of the duo’s name in sentences featuring the words ‘Kylie’ and ‘Madonna’.

Over a decade and several direction-changing albums later, and the truth of Silver Eye’s aesthetic, while decisively returning synths and beats to the fore following the sumptuous and orchestral-focused Tales Of Us, is less a regurgitation of earlier successes than a development of them. A complex, otherworldly and spacious offering, the album is centered on the concept of the moon – the titular Silver Eye – moving tides around and within us, of emotions ebbing and flowing, of magic creating and dissipating, and brings with it a heavier sound befitting of a heavenly body.

While soaringly romantic emotions have never far away from Goldrapp’s music, and despite expectations of pop hits stoked by the stage setting of synths either side of the central mic, it is to Goldfrapp’s origins that this set heads first. A surprising one-two of Felt Mountain’s Utopia and Lovely Head, complete with processed second microphone for Alison’s soaringly dramatic vocals, sound as glorious as ever.

Tonight, Alison eschews the dressing-up box of costumes from previous tours in favour of a simple black outfit whose only augmentations are black glossy enormocuffs. With these she creates shapes while dancing seductively to the beats amidst the shadows, leaving spectacular visuals depicting the moon in close-up and space from afar as the focus. The four-piece backing band bring muscular depth to her floaty, breathy vocals.

“I was going to say something,” she purrs, “but you know me by now. I don’t say very much.” And with new music this good to show off, she doesn’t need to. The new album’s lead single Anymore’s filthy synth sounds and whiplash beat recall Black Cherry moments, while Systemagic is a gorgeous gateau of sultry beats, processed guitars and a loping, arpeggiated bass overlaid with those familiar breathy vocals, and it’s impossible to avoid moving to. Also from the new album, Everything Is Never Enough is structured like a dance track, reaching for the skies, falling back and launching off again. With a shimmery beat and glockenspiel, it works as a kind of shoegaze disco, a Slowdive-ish remix of Goldfrapp. And it’s an absolute earworm.

The Haxan Cloak’s Bobby Krlic has worked on soundtracks with fellow Brit Atticus Ross, who in turn has worked with Nine Inch Nails’ Trent Reznor. This perhaps lights the strident industrial path taken for Silver Eye closer Ocean, buried deep in this set, on which Krlic shares production credits. An absolute banger, it’s by some margin the heaviest track Goldfrapp have recorded and leaves the feeling that Depeche Mode or indeed Nine Inch Nails would take this song successfully to arenas.

Of the older material, it is indeed Black Cherry and Supernature that the set mines most. Train gets a welcome ride, and there are whoops of delight for the wham-bam set-end renditions of Number 1 and Ride A White Horse. With an encore majoring on their only Top 5 single Ooh La La and the undeniable Strict Machine, they’ve pressed all the buttons. But on the evidence of their new material, and indeed the considerable number of favourites left out of this set, Goldfrapp need not rely on their imperial phase to please.

Goldfrapp’s Silver Eye is out through Mute on 31 March 2017. Tour dates and further information can be found at goldfrapp.com