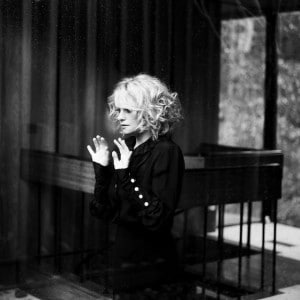 Tonight is the middle date of a whirlwind week of high profile gigs for Goldfrapp. After impressing with their show with the RNCM Orchestra as part of the Manchester International Festival, and the night before they’re due to close the three-day long Victoria Park staple Lovebox, Alison and co put their stamp on the Somerset House Summer Series.

After nearly two weeks of shows in the stunning courtyard by the Thames, with the likes of Tom Odell, First Aid Kit, Jessie Ware, Richard Hawley and Band Of Horses playing with varying degrees of anticipation and success, Goldfrapp’s show felt solid, confident and classy – they showed the pretenders how it’s done.

Someone who may well have been studying Goldfrapp videos is tonight’s support act, Polly Scattergood. Where her 2009 self titled debut was an intense, spooked affair, its delayed follow up, Arrows – due for release in September – sees her transformed into an electro-pop princess. Despite a hiccup with the heavily affected New York New York, her set – entirely comprising new material – is an upbeat, heavier sounding affair, and the likes of Disco Damaged Kids and Wanderlust are as breathy and girlish as her trademark sound ever was, like a cool Kylie Minogue.

The headliners also have a new album almost ready to be unleashed and, if recent glimpses are anything to go by, Tales Of Us is a hark back to the grand scale goth-pop of their debut, 2000’s Felt Mountain, rather than the electro-pop they’ve occasionally favoured since LP number two, Black Cherry. Theirs has been a steady rise to fame, peaking somewhere around third album, Supernature. It’s the sound they’re best known for, but by their last album, Head First, it felt like they’d overdone the electro-pop thing. So this album – and these shows – could prove critical.

As if to state their intent, they open with Brown Paper Bag, one of Felt Mountain’s most unsettling and haunting tracks. It’s the only track from their debut to make the cut tonight, and sets in motion a set that builds in momentum and becomes more and more dramatic and tense with each passing song. The new tracks take on the big, sultry Bond theme style they’ve hinted at in the past and, new songs or not, Alison’s presence means that despite an unusually sparse stage, all eyes are glued firmly on her.

She has a remarkable ability to switch from balladeer to disco diva at the drop of a hat, flitting from the gorgeous, twisted romance of A&E and Number 1 to the revved up club favourites Train and Ooh La La, until that tension explodes with final encore track, Strict Machine. With lasers dancing over the back, opposite wall of Somerset House, for the first time during the entire run of gigs, the crowd lose themselves in the music, singing along with that irresistible lyric “I’m in love…”

It’s a strange time to play a run of gigs like this – three years after their last album and a couple of months before their next – but if their aim was to remind people of what a brilliant band they can be, they aced it. Tonight Goldfrapp touched all bases, and put on one hell of a show.