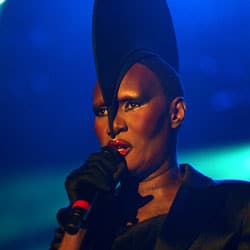 Any aspiring solo pop star has to go and see Grace Jones live. Once they’ve done that, they’ll have a greater idea of what entertaining and putting on a show is really all about.

That’s the impact the lady still has on her audience, strikingly charismatic even in the courtyard of an Inland Revenue stronghold. And she may be in the region of 60 years old – that’s right, 60 – but she’s looking as formidable as ever. Not an ounce of fat hangs from the two pillars we ought to call legs.

Her show is similarly lean. Even when she goes off stage between songs to alter her costume, a black Basque the only ever-present, she’s still talking to the audience as if she’s just gone in to a shop waiting room to try a new hat on. “Just tear the motherfucker off!” she shouts towards an unseen wardrobe assistant, promptly apologising.

These little interludes, with Jones cooing and aahing like a stretching feline, are an entertaining script to go with the real business on stage – and Jones is in frivolous mood tonight. “It’s cold out here!” she drawls, “and there I was, just gettin’ hot!” In truth hot is the only temperature setting, as she proceeds with a crackling, raw version of Demolition Man.

Williams Blood gets a moving dedication to Michael Jackson, entirely free of pretence, and then it’s time to Pull Up To The Bumper. Twenty lucky souls from the front are chosen to dance on stage with the diva over an insanely funky backing, though pity the camper that gets too close to the Jones Pole. “You break that motherfucker and I’ll break your ass”, she deadpans, grinding mercilessly in his face. It’s classic Grace Jones, and just the sort of exchange her audience have come to see.

Over an extended encore she delivers a striking, rock heavy cover of Love Is The Drug, complete with a bowl shaped hat distributing laser rays all over the courtyard – amazing to see. Then we’re Slave To The Rhythm, as with another burst of affection she introduces her band, hoola hooping all the way through. Thus her excellent backing singers, keyboardists and storming rhythm section get the credit they deserve for some well nigh faultless funk.

They’re very much part of the background, but happy to remain that way – as Jones has personality aplenty to shower on her adoring throng. There remains an element of daring in her show, however, and the final choice of Hurricane, delivered in the teeth of a force 12 from the wind machine, is powerful but surprisingly downbeat for a closing song.

No matter, for in the course of her set Jones has reminded us that there is more than a little in common between her and Jackson – the ability to fuse music of black and white origin, and a knack of drawing the most cosmopolitan audience you could hope to see. All crave her captivating presence – and all leave thoroughly satisfied.