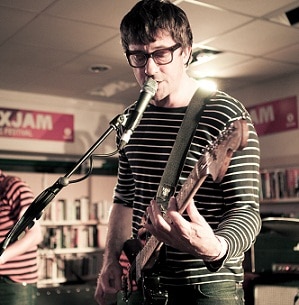 Just weeks after Blur topped the bill in Hyde Park as part of the Olympic closing celebrations, Graham Coxon finds himself propped atop a makeshift stage in an east London branch of Oxfam.

Tonight’s compare, 6Music Breakfast Show host Shaun Keaveny, must be looking on life with a wry smile too; on the day that his Radio 1 counterpart is hitting the headlines for hosting his first early morning slot, Keaveny’s donning a fake fur coat from the racks of the Dalston charity shop and encouraging the punters to buy cans of lager from a table near the changing rooms. It might not be the most glamorous of settings, but it’s a brilliantly appropriate start to a month-long season of DIY gigs, organised by music fans across the country to raise money for Oxfam. Now in its sixth year, Oxjam gigs spring up all over the place; school halls, pubs, community centres…but tonight’s launch show is at what’s become the festival’s spiritual home – the charity’s shop in Kingsland Road.

Locals Theme Park get things going with a stripped back acoustic set. They’re preparing to go on the road with Bloc Party – a band who they can be filed alongside neatly – but their usually upbeat sound, which has shades of The Maccabees and Vampire Weekend, is toned down tonight. They lose their electric backbone, giving a different, warmer slant to singles Milk, 2 Hours, and the anthemic Jamaica.

There’s a 40-minute break – giving the audience time to join Keaveny in rummaging through the rails of vintage clothing and a record and CD section that must have robbed every branch in a 50-mile radius of all half-decent donations – but when he does emerge on stage, Graham Coxon looks like Mr Oxfam. He looks like he lives there, works there and possibly sleeps there. In his trademark stripy, long-sleeved top and thick-rimmed glasses, on a stage flanked by book shelves, he launches into a set that clocks in at nearly an hour-and-a-half.

A musician who’s almost as eclectic as the surroundings he finds himself in tonight, he dips into every nook and cranny of his solo back catalogue; from the post-Blur lo-fi albums to what he refers to as his “immature songs” and the bluesy sound he’s immersed himself in of late. The likes of Spectacular bounce joyously between the old board games and second hand blazers, making tracks from this year’s album A+E – including Running For Your Life, The Truth and What’ll It Take – sound very serious indeed. Maybe it’s the informal setting, maybe his ego’s been bolstered by Blur’s summer shows, but Coxon’s never looked so laid back and so at ease, and he looks genuinely reluctant – like a kid dragged from the playground – when his time’s up, and he bows out with a version of The Spinning Top’s Sorrow’s Army.

A great launch for a great cause – look out for shows from Lucy Rose and Hot Chip in Dalston this week, and Oxjam gigs nationwide throughout October.