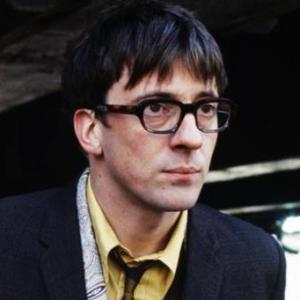 A+E is remarkably Graham Coxon’s eighth solo album. While his Blur band mates are off either campaigning in local elections, traversing around the world exploring new cultural and musical possibilities or simply just scoffing cheese, Graham Coxon has returned to what he does best in preparation for those valedictory and possibly final Blur shows at the end of the summer. The sweaty environs of Edinburgh’s Liquid Room are a world away from Hyde Park and the Olympics but you get the feeling that it is in places like these where the eternally youthful Coxon feels most at home.

A+E is widely considered Coxon’s greatest solo work and consequently there is an air of anticipation in the audience as he showcases the majority of the album alongside some choice old favourites. There is a possible spanner in the works though as Graham ambles on to the stage all toothy grinned and apologises sheepishly for his voice which is a bit scratchy and “Makes me sound like a 14 year old” so he will have to “concentrate on playing guitar”. He need not have apologised though as his scratchy and ragged vocals contribute quite nicely to a set high on pure punk thrills and immersive dense musical exploration.

Coxon has reconfigured with his old touring band of his mid noughties solo commercial peak with the addition of two female guitarists and keyboardists. The beefier sound provided by the extra musicians gives the opening salvo of new track Advice, Don’t Let Your Man Know and a wonderfully soaring version of Standing On My Own Again a thrilling muscular sound. He may be struggling with his voice but he looks to be having the time of his life onstage.

The punkier early material juxtaposes well with the more abrasive and progressive sounds of the A+E tracks. City Hall’s motorik pulse fills the room with its incessant rhythmic beat allowing Coxon to produce all manner of warped and deranged guitar sounds over the top of it. It really is a joy to see one of the UK’s greatest and most inventive guitarists at such close quarters and it’s hard to comprehend how he can produce such sounds so effortlessly.

The lighter moments of A+E come across particularly well, Running For Your Life’s bleakly humorous tale of a violence filled night out sees some spontaneous handclaps break out and the woozy psychedelic jam of Ooh Yeh Yeh is a lovely moment which sees band and audience lost in the music.

Coxon’s voice noticeably starts to flag towards the end of the 90 minute set which leads to some extended guitar jams, the very old Never Will Be is given a welcome airing and Meet And Drink And Pollinate descends into a squall of feedback with Coxon’s vocals barely audible. The vocal issues do not detract too much however from a performance of real musical intensity.

A+E’s lead single What’ll It Take? With its vocal question of “What’ll it take to make you people dance?” provides something of a challenge to the audience who respond in kind and it sets off Coxon and his band on a re-energised push to the finish with rousing run-throughs of the still utterly brilliant Freakin’ Out and No Good Time.

Coxon now has such a staggering amount of excellent melodic punk songs at his disposal that what once was his signature song can easily be tossed out three songs from the end. Instead, the gig ends on a languid, lilting note with a track from his last album the rather more sedate The Spinning Top. It is a surprising but supremely effective curveball to close with the gentle, whimsical psychedelic of Tripping Over. Coxon’s gorgeous guitar washed over the crowd and, despite his flagging voice, the gig is very much a triumph. The latest in a long line of successes in a landmark year for one of our greatest guitarists.