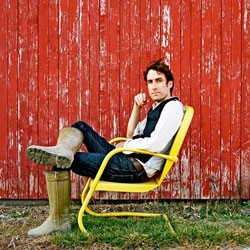 Saturday’s hangovers begin to fade just in time for Phillip Henry’s slide-guitar/dub-harmonica performance in the Chai Wallah tent, the perfect antidote to any encroaching notions concerning the modern relevance of folk music.

Whilst he references the past, covering Blind Willie Johnson and citing an array of varying world cultures, his approach is exhilarating, frenetic fretwork meshing with stunning beatbox-harmonica to create music both timeless and contemporary.

For those pondering the dearth of folk on Friday, the Green Man stage made up for it on Saturday afternoon, the highlight being Emma Tricca. A fringe cut with the aid of a spirit level and a pressed white suit giver her the look of someone destined for a Manhattan bar, but her voice and song selection is classic folk.

A sweetly plucked guitar backs songs that recall the sweet, warm, loving melodies of Judee Sill and pastoral joys of Sandy Denny. Slight jazzy elements recall Joni Mitchell. If comparisons to Sill, Denny, and Mitchell haven’t given it away, Tricca was one of the finds of the festival.

Irritatingly, prodigal multi-instrumentalist Peter Broderick ends his scheduled 45 minutes 15 minutes early, and pleas for an encore meet a standoffish response. Stage manner might not be his forte, but elegant, fragile composition certainly is, with Broderick employing loops to build songs from a single layer to combine guitar, violin, piano and voice to stunning effect. Whether his musical audacity is overshadowed by arrogance is open to debate: the beauty of closer Games, however, is not.

Noah And The Whale deliver a set of largely unfamiliar material from their new album, disappointing those at the fringes of the crowd holding out for the ukulele-whimsy of Five Years Time. Whilst a cataclysmic close piques the interest (and makes a nearby child cry, which surely constitutes some kind of success), their set jars with the relaxed late-afternoon festival mood.

It is a delight to discover that acoustic pop troubadour Rod Thomas is here with Bright Light Bright Light, downing guitar in favour of a keyboard and replete with backing band. The tales of lovelorn city streets remain, but the uplifting plugged-in delivery is a revelation, reminiscent of the Postal Service but with more than one good idea.

One thing that rankles about the Green Man 2009 are the clashes; with two sets seemingly always starting at exactly the same time, difficult decisions have to be made. Staying with Bright Light Bright Light means missing most of Vetiver, but The Far Out stage is rammed for the American folksters whose lulling, muscular folk rock washes over an appreciative audience. The final 15 minutes of their set is over in the blink of an eye.

Another unfortunate clash is set up pitting Andrew Bird against Bon Iver. Predictably the Far Out stage is poorly attended for Bird. With a set culled largely from this year’s Noble Beast, the virtuoso whistler commands attention. With expert musicianship Bird and his band translate the album to the stage with added bulk. This works better for some tracks than others; Masterswarm falls flat, but Anonanimal with a pile up of looped violins and Bird’s frantic vocal is a stunning joy.

Bon Iver‘s is possibly the most anticipated of the weekend’s performances, Justin Vernon’s wilderness songs drawing a near-silent, reverential reception from the first chords of opener Flume. It’s a familiar set, but while the obvious choices from For Emma – Skinny Love chief amongst them – get the biggest cheers, the newer songs impact most. Blood Bank introduces a harder, rockier edge to the set, while the riff-driven Brackett, W9, Bon Iver’s contribution to this year’s Dark Was The Night benefit compilation, showcases the band’s talents, rather than just Vernon’s. Best of all though is the stripped-down tension of Babys, with its minimalist piano and repeated vocal refrain achieving an intimacy and warmth to help counter the Welsh evening chill.

As throughout this tour, the band close with the crowd interaction of Wolves (Act I and II), inverting the loneliness of the song’s inception to a scream-along of several thousand people (“now when the song changes, you just yell anything you like…”). As catharsis goes, it’s pretty beautiful.

After Andrew Bird and Bon Iver, for which the Green Man might have been made, Jarvis Cocker‘s headline set is somewhat incongruous. Of course many people remain to watch Cocker perform his new material. He jokes throughout the set and dances about like he’s still in Pulp, but his rocky set threatens to put a damper on an otherwise fine day. Thankfully the bars are open late.