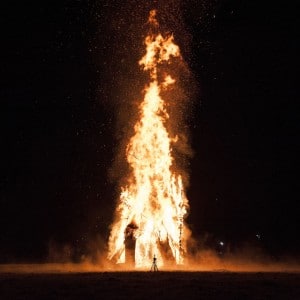 A perfect sign that a festival’s doing something right is a Thursday night line-up, pre-festival ‘proper’ actually starting, featuring Jon Langford (erstwhile Mekon, just as enjoyable solo) and Patti Smith. Far Out, the Green Man’s second stage area, is the only part of the site open for entertainment tonight but what entertainment it is.

As well as offering what is likely to be the only opportunity in history to see Patti Smith warming up for comedian Matt Berry, the Thursday night headliner, Far Out also features a ferris wheel, a fantastic selection of food stalls and hay bales for rolling in with new-found festival best friends – a festival-within-a-festival akin to Glastonbury’s Park.

While there’s no Far Out After Dark tonight – subsequent evenings will see Andrew Weatherall, Nathan Fake, Jon Hopkins and Erol Aklan stand out amid a stellar line-up – it’s not a bad way to kick things off. Even better, Far Out is under cover – much appreciated when the weather is looking wet, drizzly and less than promising, although the fact that the showers are intermittent rather than torrential offers hope.

The demographic of the line-up on Thursday (mostly hovering around pensionable age, largely comprising left-leaning socially aware troubadours who hit the scene where protest hippies merge with the anger of punk… and Matt Berry) pretty much reflects that of the audience: seasoned punk/indie survivors who’ve mellowed a bit in old age but still want to rock in a field. It is indeed “1973 with portaloos”, as Grace Maxwell will claim tomorrow, but it’s also grown beyond that, to a place where those who feel Glastonbury has become too much of an industry, as well as those who just get intimidated by Worthy Farm’s sheer scale, can remember how things should be.

Far Out is the space that could most belong to other festivals – to Glasto or Bestival in particular, to Reading or V or Wilderness, but high on the hill above the Mountain Stage it also acts as a constant reminder of Green Man’s location and identity with the fabulous scenery and well-spaced festival site rolling out before it. Remember: things haven’t even started properly yet.

The sun shines through the Brecon mist on Friday morning, helped on its way by a festival blessing ceremony performed by local druids – maybe if they’d been called in earlier in the week the weather would have been more favourable for pitching tents in advance, but don’t look a gift horse in the mouth; things brighten up considerably once they’ve finished.

This provides the perfect weather to make a wander around – and beyond – the Glanusk Park site a great way to spend the morning. Those seeking indie thrills might struggle a little, though: mornings and early afternoons at Green Man belong to the sea of toddlers and pre-teens who pepper the site, with craft workshops, bouncy castles, science edutainment (don’t have kids? Look it up), paddling in streams, tree climbing and endless face-painting opportunities.

For the parents who’ve brought them, however, the best option is to chill out in the beautiful Walled Garden, the folkiest of Green Man’s main spaces, where Annie Dresser and Keston Cobblers’ Club get to entertain the lunchtime crowd. Or lounge on the banks of Mountain Stage’s main arena for official festival openers Haiku Salut, followed by Peggy Sue. Green Man believes in chilling out in style.

There’s something for everyone, from literature to healing massages, eco-poltics to helter skelters, but today is particularly gratifying for Edwyn Collins fans: he’s interviewed about his new record and the career that led him there in the Talking Heads tent in early afternoon, and follows this with not only an acoustic set in the Rough Trade tent but a main stage greatest hits run through, too.

He’s followed on the Mountain Stage by a sublime Midlake, who have a new album to preview, and a near-perfect performance by Kings Of Convenience, who prove to be a superb choice. The Norwegians’ cheery folk seems tailor-made for the setting and atmosphere for the portion of the audience who want to relax on a hillside with a gently warming beer, while for the edgier denizens back at Far Out, Portico Quartet and Fuck Buttons are blazing a trail for the all-night dance people to follow.

By Saturday morning, the drizzle has returned with a vengeance, but there’s too much on offer to let it get in the way of enjoying the festival. There are plenty of food spaces under canvas, many of which (Hurly Burly, for example, in the Family Field) provide singers or stand-up of their own, while others are close enough to the stages to provide a decent quality of sound in the queue for remarkably decently priced, decent quality beer.

Wild Smiles, Girls Names and Arboretum are all worth hanging around Far Out for in mid-afternoon (not just because they’re playing in a tent), but no matter how hard the rain is driving down there’s a reason to venture out into it: Low, John Cale, The Horrors and Band Of Horses, all in a row on the Mountain Stage. Cale is as determined not to please the crowd as ever, deigning to allow into his set only one or two songs the audience are likely to have heard before, and even then in such ‘rearranged’ form they still sound unfamiliar, but he’s enough of a god to get away with it, and Pablo Picasso in particular has never sounded better.

Still not satisfied? Head back up to Far Out then, and enjoy James Yorkston, Archie Bronson Outfit, Steve Mason and Villagers instead (and hang around for Nathan Fake and Jon Hopkins into the wee small hours), or dive into the Walled Garden for Ólöf Arnalds and Allah-Las. Too much choice, isn’t it? And it doesn’t make it easier to decide when even every queue for the loos – clean, well-stocked with toilet paper and hand gel – has a view of everything from psychedelic puppet shows to pop-up theatre to dancing fairies to distract the floating festie. Just wander, and let the atmosphere soak through every blade of grass.

On Sunday, the sun shines once more, and in the baking heat there’s so much to do. Learn the importance of the body’s immune system by crafting a macrophage or neutrophil with some terribly earnest undergrads from Liverpool and their Society of General Microbiology mentors (and a smattering of slightly bemused but keen and attentive pre-teens), paint your own flowers or make an egg-box insect with Cardiff Arts Collective, have a sheep’s milk ice cream and give Green Man Rising – the ‘new bands stage’ – a chance.

Box Of Light and Early Ghost are worthy distractions before the short walk to long-term Green Man favourite Johnny Flynn serenades the Mountain Stage – a somewhat eclectic follow-up to the ever-entertaining Lau, and an odd sandwich filling between them and Stornoway, whose t-shirted fans are out in force. Flynn’s easy listening, pleasant folk-pop is perfect for the warm, lazy afternoon nonetheless. It’s a hard choice when Far Out is offering a quadruple evening bill of Melody’s Echo Chamber, Unknown Mortal Orchestra, British Sea Power – who turn in the performance of the festival – and Swans.

The latter is worth seeing for – amongst many reasons – the experience of 50-something Dads trying to explain Michael Gira and co to pre-teen sons they desperately want to share the experience with, as well as for the actual performance itself. Swans vs Ben Howard on the Mountain Stage and Veronica Falls in the Walled Garden is always going to come down to personal choice/curiosity about the legend, but it’s still a shame that the latter draws such a small crowd for what turns out to be a truly great performance.

At least there’s time to catch the entirety of the Walled Garden set, head up past the end of Swans and still secure a good viewing for the burning of the Green Man itself at midnight. Despite the changeable weather, the bonfire and fireworks go off without a hitch in front of an audience who have been, once again, given a fabulous festival in beautiful surroundings staffed by the friendliest stewards and security to be found anywhere this summer.

Green Man goes from strength to strength. Small enough to feel intimate but spacious enough to be a real festival with distinct areas, plenty of non-music spaces and a wealth of activities to do for all ages, this year has surely confirmed its place as one of the real jewels of the UK festival season. Roll on 2014.