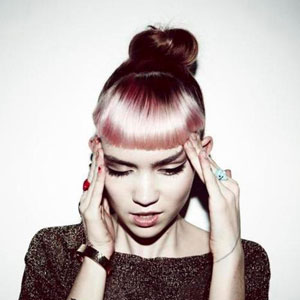 2012 has been the year that has seen Canadian experimental electronic pop exponent Claire Boucher, aka Grimes, make a decisive break into the mainstream. Grimes’ work has always been heralded amongst aficionados of slightly more oblique and outré electronic pop underground, but this year’s release of Visions, her first album for 4AD, has seemingly captured a completely new adoring audience. It’s firmly in place tonight in Edinburgh as a disparate mix of people wait reverently for Boucher’s arrival at a fit-to-bursting Liquid Room.

Grimes’ live set is a curious mix of live performance, DJ set and, at times, full on rave. The stage set up is simple with only one mixing console and an array of samplers and effects machines. There are subtle differences however, which indicate how Boucher has developed as a live performer. A shadowy male known only as Dylan, on electronic drums, joins her on stage and helps to bolster a sound that easily fills the room. Imagery also plays a key role in Grimes’ set, with the stage flanked by two projector screens that display all manner of weird and wonderful imagery. A sole male dancer completes the set up, resolutely providing a constant accompaniment of free form dancing while showing a remarkable degree of endurance.

Of course, the focus of attention, despite the backdrops and dancer, always remains on the slight and delicate figure of Claire Boucher. She emerges dressed entirely in black, cloaked by an enormous hooded cape. There is something deliciously incongruous in the contrast between the dark imagery and the exuberant personality who addresses the audience in an almost perpetual fit of giggles. Grimes is an artist who refreshingly looks like she is enjoying herself on stage. She is a ball of energy, regularly dancing and bouncing up and down throughout. As the show progresses she removes the cloak and hood and by the end resembles a kind of ballerina direct from a twisted horror movie.

The audience are compelled by what they are witnessing; something highly individual, and a great piece of art. But they seemingly don’t really know how to react. This inactivity swiftly dissipates, however, as the pulsating electro beats of Oblivion kick in and spark the crowd into a mass of heaving, swaying bodies. Genesis takes this even further and there is even an attempt to sing along; a hard task, given Boucher’s wispy and mellifluous voice, but one many people attempt all the same.

The one let down of the night is the length of the performance, with the set barely coming in at 45 minutes. Nevertheless, what we do get is very good indeed. The set culminates in a wonderfully rapturous rendition of Phone Sex, Grimes’ collaboration with fellow Canadian electro auteur Blood Diamonds. The song resembles a k-pop stormer beamed down from another planet and it perfectly sums up Grimes, an artist who singularly ploughs her own unique furrow to ever-increasing acclaim.