by Tim Lee
published: 9 May 2012 in Live Music Reviews
Tweet 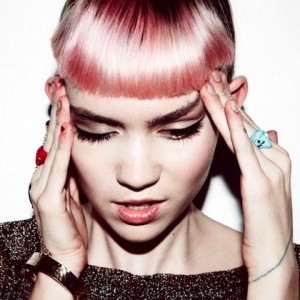 We said: “here we go”. We said: “time for a diva fit of Axl Roseian proportions”. We said: “settle in, we might be here for a while”. We said: “that Claire ‘Grimes’ Boucher. A little bit of critical acclaim and she thinks she’s all that”. We don’t half talk a lot of shite.

Following a bit of (Grimes assisted) set-up we were good to go. “Are you like, ready to start?” she asked the PA, still blaring out someone else’s music, clearly expecting to play a *lot* more of the setlist they’d spent hours carefully assembling that afternoon.

And so, dressed like the product of unholy union between the Honey Monster and a ladybird, she cracked on. No ego. No hissyfits. A simple question on whether the lights could be moodier (they could), and we began. There was a real humbleness about proceedings. A real sense that this would be exactly the same show you’d see if she was in her bedroom without this room full of people staring. Perhaps minus the scrum of topless male dancers parading about behind her.

Besides, when things soared, and they did more often than not, it was easy to get caught up in it. While her voice is the obvious distinguishing factor, there’s a real oddness to her music. Songs will start glitchy and fidgety. Then a section of car-alarming, old-skool rave will zing past, pausing briefly to throw a neon fingerless-glove clad shape. Then the beats will morph into something reminiscent of some modern R&B staple. Then it sounds like 1980s vintage Madonna.

All the while that melange of influences bubbles around, Boucher’s vocal, sometimes augmented by sampled and looped yelps and squeals, sometimes multitracked to infinite levels, flies. It’s like the bit in Raiders Of The Lost Ark when the Nazis prize open the top of the chest and the spirits shoot out and swoop and pirouette and playfully galavant amongst the onlookers. Except no one’s face melts.

In the end, it all seemed to make sense. There’s a flow to proceedings. Although at times it was hard to see exactly what was pre-prepared and what was live, it was never anything other than entrancing. She’s a beguiling presence and this was an atmospheric performance.