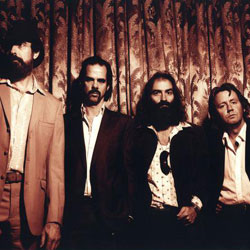 Someone should start a religion that worships Warren Ellis as a god. The man is amazing. A-M-A-ZING. Extraordinary hips. Stupendous beard. Handy on the old violin. Forget mounts and sermons and seas and partings and such like. Hips, beard – that are closer than you dare imagine to actually meeting – and stringed instruments. That’s all you want out of a deity.

The reason for this is simple. If you overthink Grinderman, you miss out. It becomes a tedious debate about a) whether this means Nick Cave is a misogynist, and b) whether Grinderman are worthy enough to stand next to all of their work together as Nick Cave And The Bad Seeds.

The people who believe a) presumably also believe that Eminem assaults people with a chainsaw, that David Bowie is actually from Mars, and that R Kelly is a bit partial to having se… OK, that last one didn’t help, but you get the idea.

Still, they’re better than the people who try and shove b) at you. They, clearly, are idiots. Idiots that have never been within a four-mile radius of Grinderman. Because this Grinderman, the one that sauntered on stage, four guys, four suits and four beards (Ellis’ is so amazing, it counts twice) and let rip, is nothing short of miraculous.

Micky Mouse and The Goodbye Man, Worm Tamer and Get It On are torn through, looser, leerier and more raucous then on record. And Cave, oh, Cave, liberated and energised, just toys with us all. Baiting, teasing. Strutting, fluttering. Kicking, screaming.

He looks like he’s loving it. And he leaves you with the following options: laugh, cry, faint, swoon. And all are equally valid reactions.

Because while the most obviously magnificent thing about Grinderman is how spectacularly fun their loud, snarling rock is, there’s all manner of other things that appeal to the slightly less base part of you.

Stuff like the primordial psychedelic groove of the set closing Grinderman. Or the straightforwardly brilliant Palaces Of Montezumla, introduced with a haughty dismissal of the recent plagiarism claims. Or other stuff that isn’t worth trying to explain because that’s not the point.

Basically, Grinderman are a bit like religion. If you don’t attempt to explain it, it will probably fill you with rapturous joy. Amen to that.