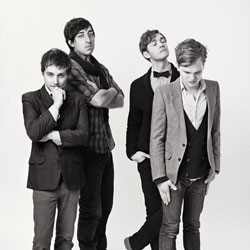 It being Hallowe’en and all, it was only fitting that the Barbican’s main stage was transformed into a spooky American-gothic set.

T-shaped telegraph poles festooned with hanging glass jars stood amid the evidence of a soon-to-be-present orchestra. A harp glints off to the side and dry ice gathers in the rafters. It’s the hottest ticket in town as saviours of American indie, Grizzly Bear, hook up with the London Symphony Orchestra for a special one-off gig. Anticipation is through the roof.

Spectrally thin in a black mini-dress, her mouth a red slash under black curls, Annie Clark, aka St Vincent, takes to the stage with just a guitar, an effects box and a lank-haired violinist for company. With no band to provide muscle for her vivid, drily witty chamber-pop, the mood becomes haunted and hushed, the guitar alternately skittish and strident, the violin rising above it like a great silver bird.

Stripped of the trappings of modern production it’s remarkable how much her songs sound like they could have emerged from an earlier, more urbane era. Actor Out Of Work, a four-to-the-floor indie stomper on record, sounds more fitting for a Parisian salon in the 1930s in this more skeletal context, the lyrics pure Nel Coward comic-drama (“I think I love you/ I think I’m mad”), the sly, jazzy violin sparkling like Stephane Grapelli‘s.

Melancholy nuggets like Oh My God and The Party drift by like echoes from distant gatherings, a little John Cale or Debussy in the violin, a little Ry Cooder in the guitar. When the violinist straps on a guitar of his own it’s for a Grizzly Bear-like Marrow, a stomping, shuddering thing drenched with fuzz and mechanistic calls for ‘H.E.L.P.’

Annie informs us that after she has seen Grizzly Bear rehearse earlier that we should ‘prepare to have our jaws dropped’ before leaving us with the sweetly old-fashioned, What Me Worry: there is no applause until the hiss from her amp dies, a sign of how commanding tonight’s performance has been.

Preceded by the black-clad ranks of the LSO and pianist/arranger/sometime member of Grizzly Bear Nico Muhly, tonight’s headliners look as much like preppy figments of Wes Anderson’s imagination as ever. Drummer Christopher Bear is even wearing a bow tie. As the orchestra twitters and sighs the intro to Easier, Muhly’s piano adding just a hint of dusty, silent-movie charm, it’s clear that this is a marriage of musical forms that was meant to be. Grizzly Bear straddle the line between the more outr reaches of pop and the more accessible regions of classical like few bands before them, and it seems absurd to expect anything less than the velvet-pillow treatment for such fine pieces of pop porcelain.

Cheerleader stomps in over a soft bed of strings, the band harmonising like the Wilson Brothers in their heyday, bassist Chris Taylor straining on his tiptoes. The restless, multi-part Southern Point is lent even more drama than its recorded incarnation by cellists sawing away at their ascending notes and subtle bursts of timpani in the arrangement. All We Ask is ghostlier than ever, the harp ticking like a clock in the shadow of Ed Droste’s falsetto, the hanging jars glowing like fireflies are trapped in them.

Droste seems genuinely awestruck by the occasion: “Does this all feel as fancy for you?” he asks, as though sophisticated Londoners must dine out on such exquisite cultural cuisine every night. The orchestra sits it out on Two Weeks, the band’s sweetest song, perhaps realising that to add any more layers to this perfect pop souffl would cause diabetes. They take a rest on While You Wait For The Others too, demonstrating perhaps Grizzly Bear’s seriousness of intent.

This isn’t some upstart rock band cramming in as much class into their act as they can under a false flag; there is a sober ambition here to embellish only where embellishment really counts. It counts on Dory, Veckatemist’s strangest, loneliest song, which the orchestra wakes up with a Disney-esque flurry of flute and brass, before the cellos plunge it deep into dark, Bartok territory.

The stern, forbidding bassline of Carole King‘s long-buried He Hit Me and It Felt Like a Kiss draws a smattering of applause, Droste sounding every bit as used and yearning as The Crystals‘ Barbara Alston on the original. They conclude the main set with I Live With You flawlessly segueing into Foreground, Chris Taylor’s clarinet featuring heavily, Muhly’s piano reminiscent of Erik Satie. Grizzly Bear take off, but the LSO stay put.

It’s no surprise at all when they walk back out for a broodingly intense Colorado, sounding with full woodwind backing not unlike Godspeed You! Black Emperor. They finally take their leave to overwhelmed applause, talking about how “These things happen once in a lifetime”. The audience picks its collective jaw up from the floor and agrees, whole-heartedly.