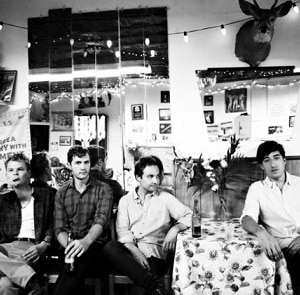 If parts of Grizzly Bear’s latest album Shields seem to grasp for a more open, expansive sound, that has not rendered their live performances any less staggering or demanding. This is a band for whom attention to detail comes as second nature, a band with songs that unwind with both subtlety and authoritative purpose. It is music that requires careful listening and serious attention, but which repays that investment and dedication with a grace, melodic richness and harmonic warmth that elevates this band above so many of their peers.

The easy option tonight would have been to open with Yet Again, the most direct and accessible moment on Shields that enraptured new listeners and disappointed some established fans (although comparisons with Coldplay are unfair). But Grizzly Bear are not ones for taking straightforward choices. Instead, they start with the atmospheric, drifting Speak In Rounds, and follow it with the textural interlude Adelma. It’s an intentionally challenging start, and the show only really takes mutual flight when Sleeping Ute blasts out of the gate into its endearing, lopsided groove.

Visually, Grizzly Bear’s stage arrangement seems designed to emphasise the collaborative nature of their work. All four band members, including drummer Chris Bear, share the front of the stage, although placing Bear and bass player Chris Taylor as far apart as possible is also unconventional. It seems to have little impact on the band’s interaction, however. This is a band as adept with creating colour and feeling as they are with carefully orchestrated harmonies. Everything seems to flow with consummate ease tonight, perhaps because the band are in high spirits and super relaxed in honour of it being Ed Droste’s birthday (a fact also joyfully acknowledged by the crowd).

The set is brilliantly paced, making a virtue of the varying musical characters of the band members, and ranging from delicate placidity to tempestuous exuberance. Often this happens all in the space of one song, as in the alternating expressions of While You Wait For The Others, or the intricacies of On A Neck, On A Spit. Even the band’s more immediate moments (the aforementioned Yet Again is certainly one, as is the new album’s surprisingly slinky Gun-Share) have their barely concealed depths.

Sometimes it feels like everything is so carefully arranged that the band are striving for some form of perfection, yet it is the dexterous pattering of drummer Chris Bear and the imposing beauty of the band’s sound (note Chris Taylor’s occasional switch to saxophone or flute) that ensure they still sound completely human. The set’s home straight is particularly effective in emphasising the band’s empathy, mixing the thrilling, effervescent side of Veckatimest (Two Weeks, While You Wait For The Others) with the bold crescendos from Shields (Half Gate, Sun In Your Eyes).

Even with all the tremendous gems on offer in the main body of the set, it’s still arguable that the band save the very best for last. The closing acoustic version of Veckatimest’s All We Ask is striking and gorgeous, the haunting chant (‘I can’t get out of what I’m into with you’) assuming an even more infectious and inhabitable quality that does on the recording. The band clearly enjoyed this show, and such an ingratiating, joyful approach helps make it possible to perform this sometimes melancholy, always imaginative music in venues of this size. The band’s growing popularity is part of their considerable achievement.