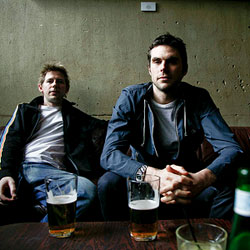 Groove Armada have had a long career that has seen them become a staple of the dance circuit. They sell out venues. They’re guaranteed draws at festivals. There is a very good argument that the genre, in the UK at least, has a lot to thank them for. And they’ve certainly developed an extremely loyal following.

After tonight’s Brixton Academy show, the second of two nights, Andy Cato and Tom Findlay are retiring their live band and will focus their future attentions to DJ sets for the foreseeable future. It marks the end of one chapter and the beginning of a new one altogether and Groove Armada certainly aren’t retiring outright; that said, this evening does feel a lot like a wave goodbye in many ways.

But instead of sadness and melancholy, there’s an uplifting sense of euphoria and delight that gives the evening an electric atmosphere. The fact that it’s a late gig (the band came on at midnight, with the curfew in Brixton being extended till the wee early hours of Sunday morning) gives it a far more nocturnal atmosphere than most shows and everyone – band and crowd – wants to just party, full stop.

They’re also throwing the kitchen sink in when it comes to production. Blinding grids of light, thick beams of colour, lasers that float in the air… no expense is spared in their attempt to deliver a night that punters won’t forget. It adds so much to their own performance, giving it enthusiasm and energy that is unrelenting at times.

Their setlist doesn’t disappoint. It consists solely of upbeat and lively material – At The River aside, which provides the evening’s only real moment of contemplation – that is meant for late night raving. Crowd pleasers such as Time & Space, Get Down and Easy all get an outing and are brought to life by the brilliant vocals of solo career-bound SaintSaviour and MC M.A.D. Another clear highlight is My Friend, which provokes a mass sing-along across the entire venue.

By the time the opening fanfare of inevitable closer Superstylin’ rings loud and clear, the audience is in raptures and they duly oblige in letting themselves go for five final minutes amidst a sea of balloons and confetti. Everyone on stage takes a well-deserved bow and that, as they say, is that. Some are hoping for a bit more but as soon as the turntables appear for the after-gig fun and games their chants abruptly die down.

Was this the perfect send off? Well, the only thing that is regrettable is the lack of something really special. You’d think that for a last hurrah they would have done something truly spectacular as opposed to just playing the set they’ve been playing on the whole tour. However, when the regular set is as good as it is, they can be forgiven. Groove Armada end their ‘live’ career on a high note that, whilst not the stuff of legends, felt joyous and fine.