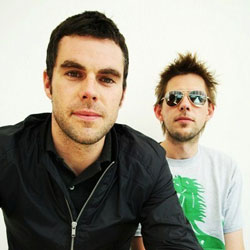 In recent times, Groove Armada have become synonymous with both the various promotions their advert-friendly tunes have soundtracked and with their annual Lovebox Weekender festival in London.

But ahead of the release of their sixth studio album, Black Light, they embarked on a tour of the UK to test out their new developments. For the venue to play host to their return to home territory, Andy Cato and Tom Findlay’s collective chose a venue with dance music friendly ethic, the Coronet, a former cinema south of the river.

As soon as the opening track began and new addition Saint Saviour took the mic, there was no doubting the biggest change to what Groove Armada are about. She was in charge, and ruled the stage. Formerly of electro band The RGBs, the girl formerly known as Becky Jones strutted, posed and generally behaved like a pop powerhouse. In her multi-coloured futuristic-glam jumpsuit she became an aerobics instructor possessed, bellowing out both the new material and taking the vocals on most of the older tunes as well.

In this setting the new material impressed. While we’re in the midst of an ongoing ’80s revival, Groove Armada have melded modern club synth sounds with some aggressively melodic tunes. Throw in a super-strong androgynous peroxide blonde and Eurythmics really are back. The songs had a consistency to them that Groove Armada’s output has lacked in the past; this time it seemed like all of the new stuff benefited from infectious choruses of Eurythmics’ Love Is A Stranger era, all synths and sass. Whether this will translate as well outside of the live environment remains to be seen.

The setlist did a good job at managing old and new material, pretty much alternating between familiar and unfamiliar. We were treated to Song For Mutya early on, complete with a dazzling lazer show, and the crowd-pleasing, dancefloor-friendly likes of My Friend and Easy were also trotted out.

Mix those in with newies I Won’t Kneel and Warsaw, and finish with a flourish of trombone for an extended version of Superstylin’ and Groove Armada can’t really go wrong. Their signature tunes still stand strong, and while there were some sound issues, they can still incite a frenzy. Twelve years after its original release, At The River made an appearance in the encore to calm things down a little.

There were no surprise guests in the form of Bryan Ferry or Nick Littlemore of Empire Of The Sun, both of whom are set for guest slots on the album, due in February 2010. Instead we were treated to the emergence of a new star who might just be able to help Groove Armada back into the charts.