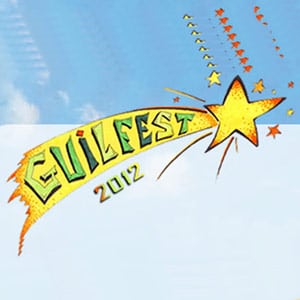 It’s hard to know which is the more horrific scene that greets arriving Guilfest revellers as they enter Stoke Park: the already ankle deep mud, created by rain that shows no obvious signs of abating, or the sea of 14-year-old girls festooned in t-shirts proclaiming “I’m Mrs Olly Murs”. As things stand at present, the weather is serving only to remind everyone that they could have gone to Benicassim this weekend instead. But hey, it’s not all glum greyness.

Guilfest is something of a timewarp this year. Escape the sea of Mrs Murses and follow their dads to the Vive Le Rock Stage, where hordes of middle-aged commuters dream dreams of wayward youth in front of punk legends TV Smith (the man responsible for Gary Gilmore’s Eyes, a song that seems to be on everyone’s covers list this weekend) and The Buzzcocks. Between them are sandwiched The Skints, a band whose name makes them sound authentically late ’70s, but who are in fact a reggae/ska/dub outfit made up of members who weren’t even a twinkle in their parents’ eyes when Pete Shelley and co. were first outraging the straights. Works well though.

Over on the Good Time Stage, the festival’s second largest, it’s ’80s night, with Heaven 17 and ABC for the mums. Shiny, smooth, suave electro pop just doesn’t suit the weather somehow, though. It’s not the bands’ fault, but this is music to listen to inside nice, dry, corporate arenas, not a field in Surrey that’s fast becoming indistinguishable from the Lido located on the other side of the site.

The rain is unrelenting, drizzling intermittently between ferocious showers. Far too many people, it seems, are either hiding in their tents or have put off even pitching them until tomorrow. The festival site seems rather empty, and back at the main stage with The Straits, former Mark Knopfler collaborator Alan Clark is entertaining the small crowd with a combination of his old hits and a staple diet of rock’n’roll favourites. The Straits really aren’t too Dire, and it’s hard to think he didn’t name his new band just to give lazy journalists the chance to use that line as often as possible.

For the hardy few who stick it out until the end of the night, Jools Holland and his massive orchestra are consummate entertainers at least. Filling the stage with as many people as it can hold, he fronts a multi-talented band in which the trumpeters not only play in perfect harmony, but they can sing it too. When You’re Smiling and Enjoy Yourself (It’s Later Than You Think) might seem like ironic pokes in the eye at the moment, but it’s all terribly British in a bizarre way. Rain, mud, a field in Guildford and a bloke off the telly playing 60-year-old jazz favourites. So what if there’s no Glastonbury this year?