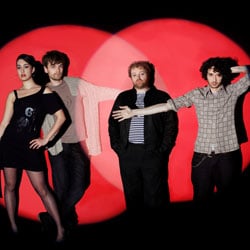 Trust Guillemots to do something a bit different. Their two albums so far have shown them to be miles away from run of the mill indie bands, mixing pop, disco and even samba rhythms, and for their Fishbone For A Drink tour they were their typically unusual selves.

In fact, The Plug was probably the most conventional venue on the tour – which has taken in libraries, a converted cinema and even a cave in the middle of Cornwall.

Before the performance, there was a selection of short films by innovative company Future Shorts – accompanied by an improvised score by the band, sat behind the screen. Unfortunately, your trusty reviewer arrived too late for this, only catching the last two minutes of the final film, but it seemed very impressive and was greeted very warmly by the Plug’s large crowd.

The rest of the show was more conventional – well, as conventional as Guillemots get. They remain one of the most entertaining and unusual pop acts around today, switching effortlessly from one genre to the rest and looking like they’re having the time of their lives onstage.

Impossibly tall frontman Fyfe Dangerfield kicked off proceedings with a beautifully stately version of My Chosen One, before the rest of the band joined him onstage. “This is our new single, it’s called Sex On Fire” Dangerfield joked before the clattering electro rhythms of Kriss Kross provided the show with its first of many bursts of energy.

They’re certainly a talented bunch – as well as Dangerfield switching between keyboards, guitar and bass and Greig Stewart keeping things steady on the drums, there was also the comely figure of Aristazabal Hawkes on double bass, bass guitar and every so often hammering on a free-standing drum. Brazilian guitarist MC Lord Magrão also provided many moments of experimental noise, creating all manner of weird and wonderful effects.

The setlist took in the best moments from both albums (although sadly there was no room for Annie Let’s Not Wait), a few B-sides and even previewed a new song Alaska, which hints at a much heavier rock sound for the band. There was even a reassuringly human moment when Fyfe messed up the first verse to the wonderful Made Up Love Song #43, prompting a large round of applause when he attempted it again.

Although there was a fine acoustic interlude of Standing On The Last Star from Fyfe, the best moments came when the whole band let rip – the joyous Trains To Brazil was a particular highlight, as was a stunning reinterpretation of Get Over It (complete with some very heavy percussion), but the epic set closer of Sao Paulo was just immense. Starting off as a piano heavy ballad, it slowly built up and up over its 11 minutes until switching tack completely halfway through, transforming into an ecstatic samba jam – with Fyfe beating the hell out of a dustbin lid for good measure.

After such a barnstorming performance, an encore of Waiting For The Sun seemed a bit anti-climatic, but it couldn’t spoil the mood – Guillemots are still one of the most vibrant and engaging acts you’re likely to see live.