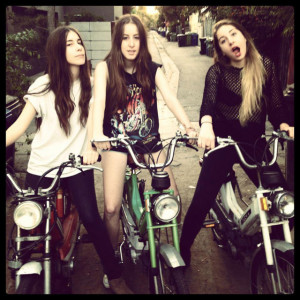 During tonight’s sell out show, Este Haim brushes her hair from her eyes, rests her hands on her bass guitar and tells the Kentish Town crowd: “It’s fucking rad to be here.” Judging by the near hysteria that greets her and her sisters’ every move this evening, it is clear that London is pretty pleased to have them.

Roughly a year ago Haim were hyped as one of 2013’s bands to watch. As the year draws to a close and they play to sell out crowds across the country and their debut album appears on a fair few ‘best of 2013’ lists, they have delivered on the critics’ promises.

Tonight they are superb. Maybe it is the advantage of being siblings (they seem to get along almost freakishly well), or years of playing music in some of the less salubrious venues in the San Fernando Valley. Either way, they put on one hell of a show.

They might not have a great deal of material – debut album Days Are Gone makes up the bulk of the set and is only 44 minutes long – but what they lack in breadth they more than make up with enthusiasm. Whether it is Danielle taking a break from numerous additional ’80s guitar solos to bait the crowd: “Are you with us London?” or baby of the family Alana causing near chaos with security by heading into the crowd, Haim know how to play their songs, but more importantly, they know how to perform.

They open tonight, after making the crowd wait a good half hour later than billed, with Falling. Este is a photographer’s dream, gurning and jerking in time as she plays the shamelessly ’80s style bass riff, and her sisters harmonise like a ’90s r&b girl band.

There follows a cover version, Danielle like a (slightly) longer haired and female Peter Green riffing like her life depended on it through the swamp blues of Oh My by none other than Fleetwood Mac, a band with whom the sisters are frequently compared, albeit for their poppier material. It gives them a chance to improvise and, whilst the tribute to a key influence might be lost on many of the crowd, the sheer fun the Haim sisters seem to have playing it radiates through. Haim are great fun because, unlike a lot of bands that emerge in a flurry of hype, they really don’t take themselves very seriously. This is shameless, fun time pop rock, packaged up with a shedload of personality.

As well as their abundant musicianship, the sisters themselves are all uniquely compelling to watch. Este, veers from the aforementioned gurning mid song to flirting with the crowd about removing her outfit, Danielle is the serious one, almost snarling some of her lyrics, while Alana combines running about the stage with some improvised percussion and cutely timed coquettish fingers-through-the-hair moves.

They end tonight’s show with the aptly titled Let Me Go. On their album it has some neatly placed drum stabs; live, they end it with a smart three girl drum improve session, manically pounding the skins, grins on their faces throughout.

There are many who might knock Haim for having their influences at the less cool end of the music spectrum, or berate them for not continuously telling us how important they are. The irony is that, on tonight’s evidence, they are exactly where they deserve to be and doing a better job of it than many of the poseurs ever could.