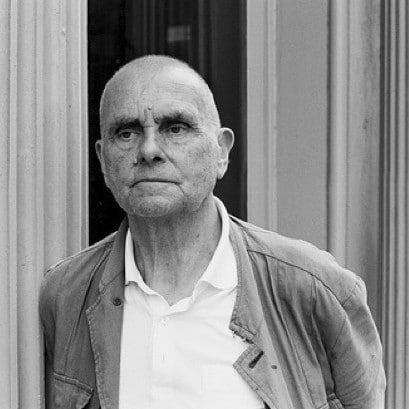 Cafe Oto – Britain’s coolest venue according to Italian Vogue magazine – is heaving with a sell-out crowd steaming up its rain-lashed windows. The devoted throng has gathered in the functional, stripped-back confines of the converted Dalston warehouse to witness a set from Hans-Joachim Roedelius, the man whose experiments as part of Cluster and Harmonia helped shape and define ambient music and krautrock in the 1970s.

Silence descends as the 77-year-old Berliner takes to his laptop, on a level with the audience, which further enhances the sense of intimacy. The sounds of Tibetan singing bowls and blasts of harp strums fill the air alongside electronic synth washes, creating an abstract, ambient opening.

This atmospheric beginning is broken through as Roedelius switches to the keyboard to play a selection of melancholic piano pieces. An autodidactic pianist, his plaintive compositions are deceptively simplistic on the surface, yet their emotional charge reveals their hidden depths. A case in point is provided as he airs one of the compositions he co-produced with US composer, Tim Story, under their Lunz moniker.

The audience retain their hushed silence, which is common in this venue where music is there for the listening rather than serving as a backdrop for a shouted debate next to the bar, and that silence remains unbroken even between tracks. It’s as if the crowd are fearful of breaking the spell they are currently under.

Roedelius, who has become increasingly prolific with his musical output in recent years, switches back from keyboard to take the set back down a more abstract path. Rhythmic clunks and clicks, hums and drones and field recordings of bird song mingle with the sound of the torrential rain outside. It conjures up the memory of the story of fleeting Harmonia co-member Brian Eno‘s original ambient epiphany that he had lying in his hospital bed while listening to 18th century harp music and the sound of the falling rain outside.

The crowd finally emerge from their awed silence and erupt into applause and whooping once Roedelius says, “I think that will be enough”. He then stays behind for an extended bout of autograph signing and chatting with fans.

The piano-based compositions may be reminiscent of Bach and Michael Nyman at times and his electronic works may seem less adventurous than they did when he was breaking new ground forty years ago but, nonetheless, the emotional depth, magic and hint of wilful, fearless experimentation is still clear for all to hear. The debt of avant-garde electronic music to the humble septuagenarian should not be underestimated, and tonight’s impeccably behaved crowd certainly granted Roedelius the respect he and his music are due.