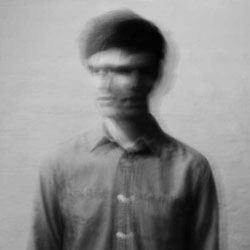 The Harmonic Series concerts and events, curated by South Bank Centre artist-in-residence Oliver Coates seem to have found an ideal match in the broad-minded, experimental impetus of the annual Ether Festival. The festival has already united modern composition (performances of works by Louis Andriessen and Igor Stravinsky) with forward thinking electronica (Wolfgang Voigt, Oneohtrix Point Never). Now comes an event that ties it all together in one performance.

Initially billed as an evening of modern song, with Polar Bear‘s Seb Rochford swapping the drum kit for an acoustic guitar and a microphone and with a headline set with the tipster favourite made good James Blake, the final event proved to be something more complicated. It began with a brief animated film, included a piece of contemporary composition and a rather unexpected collaboration between electronics and acoustic drums.

Seb Rochford opened the musical proceedings with a brief set of his delightful, homespun songs. At the drums, Rochford is powerful, relaxed and confident. His mode of performance as a singer-songwriter is rather different. Perched on the back of a chair, with his feet resting on the seat, he looks reticent, perhaps even uncomfortable. His singing voice is fragile and subject to the occasional wobble. His lyrics are resolutely unpretentious and unwordy. Yet there is something unique and individual about these songs. They seem genuinely personal and honest – and while they are not delivered with the same degree of exuberance and flair Rochford brings to the drum kit, they have an innate musicality and intelligence. At the very least, they are the product of an exceptionally open-minded musician – one for whom genre boundaries exist to be crossed.

Rochford then moved to the drums, where he performed with electronic composer Anna Meredith. Meredith is certainly destroying perceived conventions about the role of a composer (the very fact that she is also a performer is refreshing enough in itself). With Rochford offering his usual dynamism and clear intent, the polyrhythmic possibilities of her direct, forceful music were clearly communicated. Yet, on the level of sound and texture, it all seemed a bit limited and incomplete. There are artists in the electronic music worlds making similar music with more range and impact (Luke Abbott springs to mind).

Meredith then joined an unconventional chamber group with composer Max de Wardener, special guest Mara Carlyle, Rochford and curator Oliver Coates. The piece was supposedly an investigation into the harmonic series, with Coats playing a loose, possibly extemporised melody in harmonics on the ‘Cello. The other players strummed relentless heartbeats on their zither-like instruments. For all Coates’ laudable intentions, this felt a little isolating and precious.

The vast number of young males in the audience had clearly come to see James Blake and the second half of the concert was devoted entirely to him. Few artists have been quite so divisive in 2011 so far, with many reacting with bizarre anger at Blake’s use of vocoder and Auto-Tune on his vocals. His music is not really radical in any provocative sense – but it is brave in its studied minimalism. His excellent band, featuring Ben Assiter on (electronic) drums and Rob McAndrew on guitar are skilled and subtle musicians, although there is often a feeling that they are there purely to serve Blake’s vision. His impressive debut album is meticulously recreated, rather than brought to life.

Some of the limitations of the album seem to hit home more in a seated concert setting, There is a very limited range of sounds – the music defined not just by the vocoder, but by the use of the Prophet synth and Nord electro piano. The electronic drums further distance the music from dynamism. Still, that being said, these soulful modern folk songs are still unconventional in structure (relying a lot on cumulative repetition) and striking in character. Some clever sampling helps create tension, and the best moments are when the whole band contributes to the growing intensity, as on the brilliant I Never Learned To Share and The Wilhelm Scream. The best thing about Blake is that he refuses to be pigeon-holed – he has gone from being a feted dubstep producer to a modern singer-songwriter. Who knows what his next move will be?