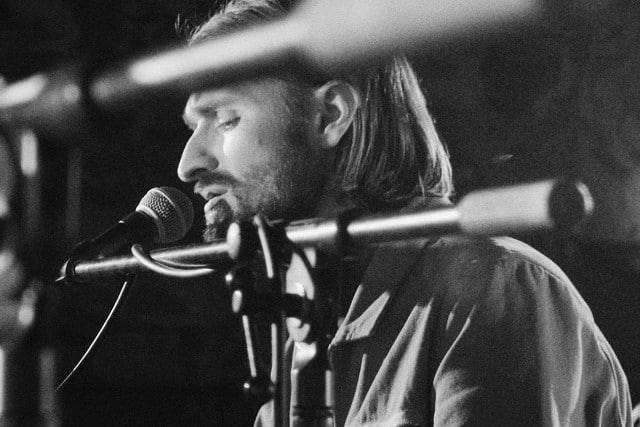 The songs of Hayden Thorpe’s former band Wild Beasts were famed for their sensuous chronicling of desire and lust and Diviner, Thorpe’s first solo album since the band split back in 2018, shows that he still very much has feelings that must be expressed. Tonight’s show demonstrated he’s still an artful performer, armed with new songs that have a florid intensity to them.

He played the songs on an exposed, upright piano while also deploying sampled elements and beats from a nearby device to ensure the broader sound of the album was conveyed. The title track from the album saw his vocal flicker and flash across the lucid, crystalline piano. Like much of the album it had an obsessional undertone as he sang of “living a fever dream” and addressing his nameless ‘diviner’. Later, he goes deeper on the finely delineated Earthly Needs, singing of “emotional jiu-jitsu” as he increasingly looks inward.

Anywhen sees him excavate long-buried memories, singing how “now when I think of us, I pretty much self-combust”. In short, it’s deeply felt, corporeal stuff. There’s a clipped finesse to Stop Motion which also further focuses on matters of the body, this time with humour; “I’ve been working out… can you see the change?” In some ways the album is reminiscent of John Grant’s Pale Green Ghosts in how it directly addresses a former partner (although Diviner contains nothing remotely close to the savagery of that album).

It’s a theme that he continues compellingly during In My Name, landing the line “if you must crusade, don’t do so in my name” with pinpointed vigour. At this point there’s almost a feeling that this emotional turmoil bubbling under the surface may suddenly break through and sweep aside the cloaked honesty of the performance so far. Musically, there’s hints of Kate Bush and Bryan Ferry, not to mention mid period Talk Talk (appropriate, given his starring role in the Mark Hollis celebration held at the Southbank only a week earlier). At one point he goes back even further on an exquisite cover of Song To The Siren by Tim Buckley. In a more contemporary comparison, it’s possible to draw parallels between him and the emotional openness found on the two albums by Douglas Dare.

On Human Knot he leaves the stage to encircle the seated audience, singing starkly and claustrophobically of “headlocks and double knots, headfucks and paradox”. Straight Lines and Impossible Object close the show, both in possession of an ecstatically charged delicacy. Tonight was a welcome re-emergence, proving Hayden Thorpe is ready to reignite his career.