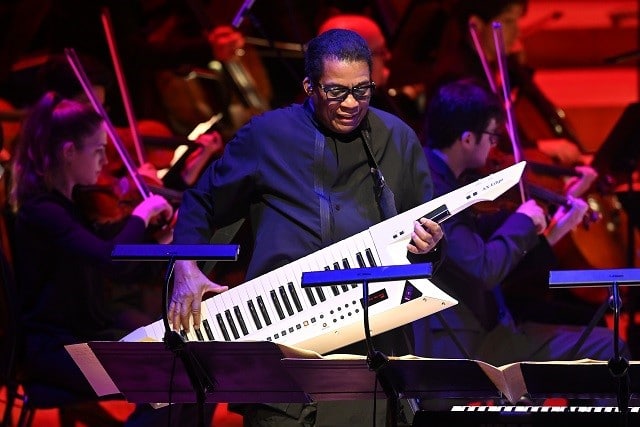 The London Jazz Festival has a long history of bringing artists together for collaborations, and one of the standout events in this year’s line up saw legendary American pianist and composer Herbie Hancock perform with the LA Philharmonic under the guidance of Venezuelan conductor Gustavo Dudamel.

The first half of the concert saw the orchestra and conductor occupy the stage to perform two European premieres by two south American composers. The first piece was Guasamacabra by Venezuelan composer Paul Desenne. Ahead of the performance Dudamel addressed the crowd, to praise “music without frontiers or walls”, a concept that would define much of tonight’s show. The piece was in possession of rich, buoyant colours and a distinctly Gershwin feel emerged in the early stages. The name of the piece originates from the Spanish word ‘guasa’ which can mean playful or light-hearted and this certainly was apparent in the gregarious rhythms and stylish musical presentation of the orchestra. There was a silvery exterior to much of the it largely courtesy of the prominent glockenspiels before matters got more direct and several musical cliff edges helped close the piece.

The second piece was Téenek–Invenciones de Territorio  from Mexican composer Gabriella Ortiz. It was lively, upfront and dynamic from the off and later featured some lush string passages and moments that built up to a loose groove. The glockenspiel once again leads the dance and the orchestra also charged to some striking mid-piece denouements. This was bold, sky-scraping contemporary orchestral music that showed the genre can still have appealing immediacy and drama. 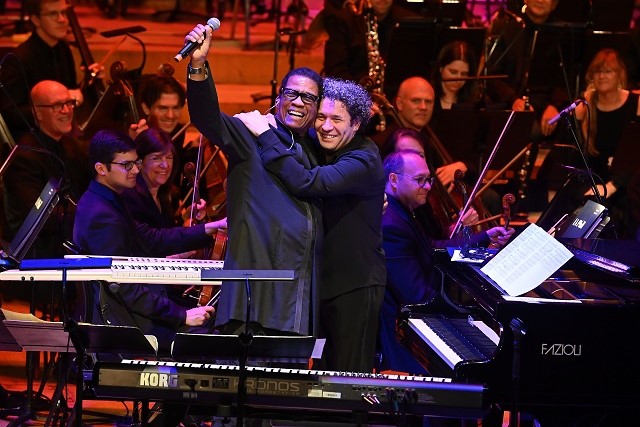 The second half of the show saw Herbie Hancock take to the stage with his impressive band to play alongside the orchestra in a supreme coming together of musical talent. He drew primarily from two of his acclaimed albums from the 1970’s, Thrust and Head Hunters. The fluid manoeuvring and indelible funk of Chameleon came first, followed by the pensive piano pathways of Butterfly receiving ravishing orchestral accompaniment from the LA Phil. At one point Hancock played keytar and stepped away from his bank of keys and piano, much to the crowd’s delight (the customary audience reaction to any appearance of a keytar). “Who said orchestras can’t swing?” her asks afterwards, not unreasonably. Rockit saw turntables added to the musical mix, its engaging musical navigation still sounding sharp and substantial.

The orchestra disperse to leave Hancock and his band alone on stage. He comments how they’re going to play “the musical equivalent of a smoothie, lots of different compositions”. We get the sunny, breezy fusion of Actual Proof, all glinting accents and dazzling technicolour vistas. Later, they really attack the iconic, roaming melody of Cantaloupe Island. He may be in his sixth decade of performing but tonight Herbie Hancock showed he’s still a formidable creative force, proudly displaying his rich history yet also very much receptive to the never-ending possibilities of music. 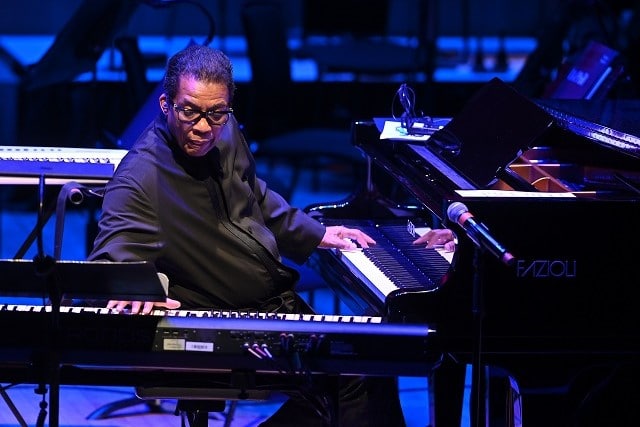