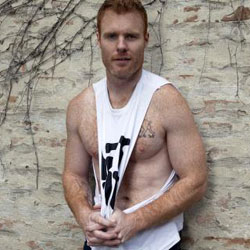 “We’re Hercules and Love Affair and we’re going to play a bit of boogie for you!” Andy Butler blares into the mic as he whips Heaven into life.

The big gay disco to come is a world away from Toronto’s Austra, even if they have a song called Young And Gay. The recent addition to Domino’s roster drape Fever Ray‘s synths with a beat, creating well received dark intensity with three-way vocal harmonics and Bat For Lashes-style face glitter. They’re impressive.

The three years since Hercules And Love Affair’s inspired first album feel an age away. Butler’s troop retains Kim Ann Foxman whilst a fresh group of collaborators who have worked on second album Blue Songs also share stage space. Where the immediacy of the songs is perhaps less striking on record, in the live space it sits much more comfortably. In some cases – like disco-classic-in-the-making Falling – it’s even more vibrant.

“That was foreplay,” drawls Butler. “We’re gonna get nasty nasty” he teases. “Then we’re gonna jackhammer you!” clarifies Foxman, as she prowls about in a yellow jumpsuit. Butler and co’s relentless and unashamed mission for a hands-in-the-air party is as hard to resist as it is unbelievably outrageous (ask the bouncer at the front, who stared at Hercules And Love Affair for much of their set with a perplexed frown across his face).

Even Kele Okereke (sporting a green Gucci sweatwhirt and baseball cap) looked at little uncertain of what to do with himelf removed from the safety of a guitar for Step Up’s revisit to ’90s house. Failing to take a cue from those dancing around him, he opted for a loose grip of the mic stand and a tap of his feet. In the grand scheme of the evening’s dancing, he may as well have picked his nose.

Butler’s oversized pyjama suit was very soon proving too much to bear, as he proved by ripped it off and dashing out from behind the mixer to gyrate barechested centre stage. Forthcoming single My House strutted more of the ’90s dance influence which features prominently on Blue Songs. I Can’t Wait’s fusion of techno and glitchy electro house would have surely have even had Okereke moving in his spot offstage, whilst classics You Belong and Blind (sans Antony, as has always been the case live) swept up the floor like a bowling strike.

On tonight’s evidence, Hercules And Love Affair’s current guise is something that should prove, once again, difficult to repress. They offer plenty to smile about.