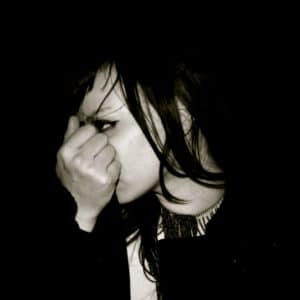 Hilary Woods mentions, at the end of the show, in pretty much the first indication of acknowledgement of the people who sit in front of her, that’s she’s incredibly nervous. Throughout the rest of her set she says absolutely nothing.

Actually, absolutely nothing barely covers it. Because there’s more to it than not just engaging in some hilarious crowd-artist banter. The whole set, she barely holds anyone’s gaze. Barely looks up. It does lead you to wonder if its actually more nerve racking playing a show where you can literally count the white’s of the crowd’s eyes than something bigger.

Sure, more people, but when it becomes a heaving mass of bodies, indistinguishable and devoid of form, how off-putting can it be? Here, you can literally hear if someone takes a sharp intake of breath. Or shifts in their chair. Or gazes upon the biblical scenes that surround the stage and has an existential crisis about the purpose of being.

So Woods creeps on. Drags her chair across the sacrosanct ground with a screech that is amongst the most piercing noises we hear all night, sits down at her keyboard and starts to play. She starts to play Bathing, in fact, from her 2016 EP Heartbox. It is bare and stripped back. Which given that the original was hardily gaudy and extravagant, is no mean feat.

Take Him In is constructed from deceptively simple piano lines; woven and layered and looped into complexity. It oscillates and sighs, rises and falls, and leaves you with a sense of distant betrayal. Inhaler, a recently released as a single, is folky and poised, but oh so sad and withdrawn.

If that’s the folkier side of her spectrum, the toothier end is covered by Jesus Said. Suddenly the beatific fields are replaced with rainy neon, the keys buzzing with intent, her soft voice suddenly full of malice.

Mostly tonight she’s positioned behind the keyboard, but she does venture out to pick up a guitar on several occasions. On You Can Keep Your Distance, there’s an echo of the fluttering, flamenco strings of Anna Calvi, albeit without the screaming extremes of emotion.

Even without her announcement there is a definite feeling of her confidence growing across the set. Ok, Woods doesn’t is not drinking pints from the front row and pulling people from the pews to rock out on stage, but the set ends with a sure-footed and eminently creepy My Daughter, My Gold. It caps a hugely compelling and engaging performance.