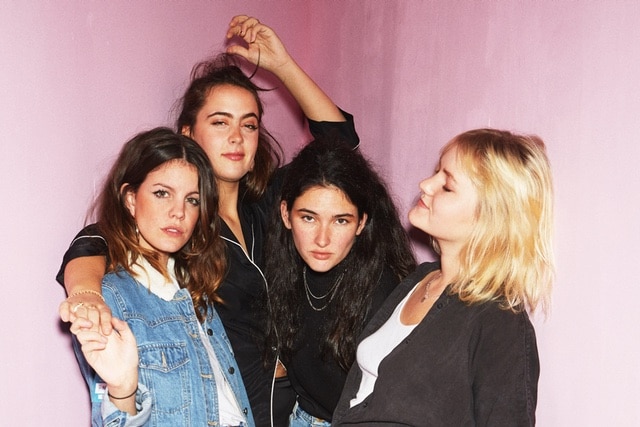 On the hottest day of the year so far, it seems only right to be watching a band that are pretty much the musical incarnation of a summer’s night drinking disco tins in the park with your best mates. Severe train delays (it was hot in London) meant an arrival just at the tail end of Horsey. Sequinned jackets, catchy rhythms and a trough full of charisma swiftly banished any lingering grumpiness.

Hinds arrive on stage already dancing and clinging to their cans of beer amid screams and cheers. They take a moment to grin at an adoring crowd and then launch full pelt into The Club, the opening track from their new album I Don’t Run, and perfectly suited to this hot, sticky evening and the no doubt countless sore heads and pink skin showing up at the office tomorrow.

Chili Town is up next, a song written under the influence of sangria, and if it it wasn’t already clear, the band are here for a party. A fantastic cover of Kevin Ayers’ Caribbean Moon, released as a single by Hinds last summer, and this corner of Brixton is in throng of a scuzzy luau.

A couple of years of constant touring has tightened up the bands playing, but this has not dimmed their joyful and at times chaotic stage presence. The band keep up the frenzy, and quickly check with the security staff to see if crowd surfing is OK. It’s not, so with a disappointed shrug and an eye-roll to the man they get on with pushing the limits of orderliness.

Carlotta Cosials and Ana Perrote share vocal and guitar duties, at once both supportive and yet pushing the other to go further. It’s the band’s philosophy: they are here on their own terms, and they don’t need anybody else, just each other. The band is able to take a breather as they slow it down – just slightly – for Linda; the gentleness, sadness and exhaustion amid all the anger and bluster makes it stand out live as much as it does on the album. Then, there’s a proclamation in advance of Tester, ‘We repeat six times in this song: “Should I’ve known before you were also banging her?”’, a song that is pure Hinds, clattering, angry, crazy, fun and strong.

But the band aren’t done with pulling at our heartstrings just yet; Cosials takes a moment to introduce the band as best friends first, and thanks London for embracing them so quickly when they put Bamboo/Trippy Gum up on Bandcamp without ever having performed live. The opening chords of Bamboo sound out and any remaining restraint is lost.

Just when you think you can’t dance or laugh anymore fellow Madrid band Baywaves, who opened the party this evening, join Hinds for a wonderfully effervescent and ramshackle performance of Thee Headcoatees‘ Davey Crockett. Cosials and Perrote are guitarless, so it seems only right they launch themselves defiantly into the arms of their new friends in the audience.

After just a few moments, the band return for a three song encore, and despite security’s best efforts it’s game over: crowd surfing, a mini stage invasion and even a comedy chase scene ensue, and still grinning and laughing, the band invite everyone to a local boozer to carry on the party into the early hours, as is the Hinds/Madrid way.