by Helen Clarke
published: 7 May 2014 in Live Music Reviews
Tweet 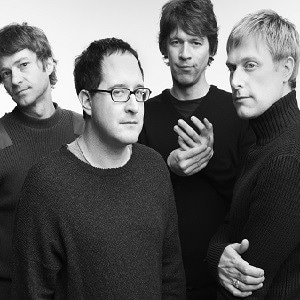 Back in 2008, The Hold Steady were at their commerical peak in the UK. Their fourth album, Stay Positive, charted at number 15 and the London leg of their tour was at a sold out Roundhouse. Fast forward six years and Stay Positive’s follow-ups haven’t made the impression record bosses might have been hoping for.

In fact, tonight’s show – a fortnight after the release of their sixth album, Teeth Dreams – is at the somewhat more ‘intimate’ Bush Hall. But one thing that’s not changed is the open devotion of their fans and the chemistry between them and frontman, Craig Finn.

Of course the fans know what to expect; in their decade together the Brooklyners have rarely strayed from their trademark sound. A curious blend of drawling American rock and nerdy, studious story telling, they channel The E Street Band and The Replacements; they’re brainy enough to keep your ears peeled, but you’re never sure if and when they might hurl a nerve-tingling rift your way.

It might be smaller than some of the places they’ve played over the years, but something about the Shepherd’s Bush music hall, with its chandeliers and plush red velvety interior, intrinsically suits The Hold Steady; the pseudo luxury reflecting the band’s accountant-down-the-pub demeanour. Finn himself looks like French president Francois Hollande letting off steam.

Tonight they trawl through their back catalogue; from the show – and the new album – opener, I Hope This Whole Thing Didn’t Frighten You, to the mighty Chips Ahoy and Southtown Girls, from 2007’s Boys and Girls in America, and The Weekenders, from 2010’s Heaven Is Whenever.

The new tracks are perhaps the most interesting to observe. Teeth Dreams has been one of their most warmly received albums, with critics and fans alike warming to its more mature subject matter, which looks deeper into the lives of Finn’s cast of drop-outs, bar poets and confused, misguided youths than its predecessors. Its songs stand up to the live test tonight, but there’s little to make them really stand out against their earlier material. If anything, their strength is that they sit quite comfortably amongst the well-loved tracks of yore, which still miss the influence of former keyboardist Franz Nicolay. Since he departed in 2010, a third guitarist, Steve Selvidge, has been recruited. His contribution has been to slap sprawling axe over songs which might previously have been quirked by Nicolay. It’s a satisfying change that has helped them make the shift away from indie rock to something not far from being a classic American rock band, but those who loved the kookiness and peculiarities of their previous albums will be left frustrated; Teeth Dreams is probably their safest record.

A four song encore – Citrus, Constructive Summer and crowd favourites Stay Positive and Killer Parties – rounds off the gig, but it’s Finn’s traditional farewell that signals the end for those at the front. “There is so much joy in what we do up here,” he gleefully pronounces, pointing at people across the room…”We are The Hold Steady. We are all The Hold Steady!” And for that moment, any analysis of their ups and downs, various albums’ merits and the size of venues they’re playing is forgotten. Finn, the over excited accountant, now stripped down to a crisp white tshirt, fist pumps in the direction of his adoring crowd –  a final reminder of the mass of contradictions that make The Hold Steady such a charming and enduring band.