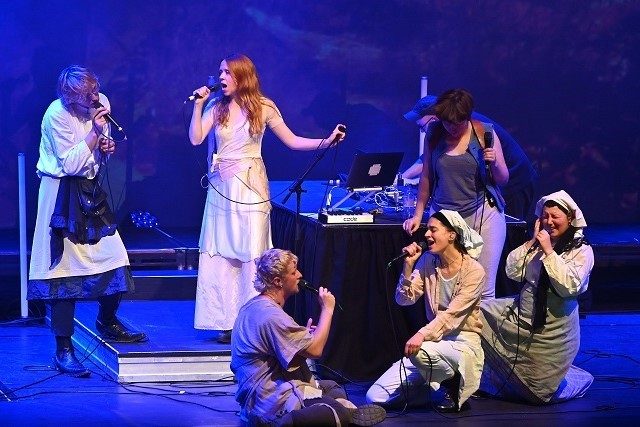 The Barbican can’t be accused of hiding away from the big concepts this year. Their ongoing Life Rewired season has already seen Pantha Du Prince contemplate the possibility of trees communicating with each other and Max Cooper tackle the weighty subject of infinity. The latest instalment saw American sound artist Holly Herndon showcase her PROTO album which focuses on imagining the affect artificial intelligence could have on music and specifically the human voice.

There’s little doubt we’re on the cusp of a new technological era and Herndon is very much in the vanguard of artists exploring how it can be used to push music in interesting directions. Much of the focus on artificial intelligence has centred on uneasiness over its potential negative impacts yet the creative possibilities haven’t really received as much attention.

For PROTO Herndon developed an artificial intelligence program (that she named Spawn) to help create a piece of work that fused avant-electronic music with the human voice. Sadly, the machine wasn’t with Herndon and her ensemble on stage tonight (towards the end of her show she explained how it wasn’t quite ready to be used in live performances due to being “a little stage shy”). She was however joined on stage by five other singers and Matthew Dryhurst on electronics.

Birth and Alienation open tonight’s show as they do the album, all high end electronic texture and clashing sonic entities. They show how Herndon’s music is the exact opposite to background music – this is defiant ‘surface music’ that is difficult to bypass. During Alienation in particular we hear the music of exposed wires and complex computerised networks and at times, like in the hyper-accelerated crescendos of Eternal, it’s the sound of pure technological overload. Crawler is less overtly futuristic however and is the first moment where we see her interest in polyphony first properly materialise.

As the show progresses the sound of the human voices begin to dominate, more than they do on the album. This also coincides with a feeling that the differing elements are struggling to be fully reconciled into one cohesive whole. The dramatic stylings of the vocal ensemble are at times detracting and the visuals on the backdrop seem to be arbitrary and underwhelming rather than adding any specific context to the music. This may in part be felt due to the high levels of success other artists have experienced over recent years at the Barbican in incorporating these elements seamlessly. This sensation isn’t really forthcoming tonight and there’s a sense of disjointedness that crops up throughout the rest of the show (although it must be noted that she receives noisy acclaim at the end from tonight’s crowd).

She dips into 2014’s Platform album for Chorus which has a greater sense of musical synthesis, incorporating prominent beats and blocks of flickering melody. The heavily processed, maximalist harmonies of Frontier follow but feel cold and dispassionate, and like much of the show are hard to fully emotionally connect with. The sudden appearance of various singers from London Sacred Harp positioned among the hall help provide a welcome additional dimension and later on Evening Shades the audience are encouraged to participate in a vocal call and response exercise which is recorded to help improve Spawn’s knowledge and performance. Swim meanwhile recalls Herndon’s fellow traveller in sound Julia Holter and Last Gasp hints at what Kate Bush transposed to the year 2500 could sound like.

Disappointingly, Godmother, one of the most striking moments on the album, does not feature tonight. It’s a shame as the glitches in the system and software malfunctions found in that track offer some of the most overtly AI moments of the album and could have offered an interesting addition to the dominant choral music. Later, they return for an encore of Fade from her 2012 album Movement which sounds just as contemporary as PROTO. Herndon is clearly a musician with bold and ambitious ideas who is comfortable taking risks and challenging boundaries but tonight’s show felt a little jumbled and underdeveloped.