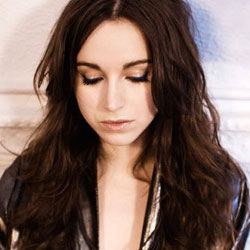 Firstly, let’s get the business about the venue for Holly Miranda’s long-awaited London debut out the way. Yes, the gig was performed in a library, an unusual choice certainly, but in a way made almost redundant by the fact that it could have been anywhere. There were no concessions made, no acoustic strumalongs by candlelight amongst the weighty hardbacks, just a full-band gig that happened to be in a library. The only difference really was that there was no bar and there was no raised stage, Miranda and her band having to eyeball the front row.

Thankfully, Miranda has some pretty amazing songs to fall back on, regardless of venue. The Magician’s Private Library (hence the setting) was released to wild acclaim at the beginning of the year; acclaim that, strangely, seemed to fade almost as quickly as it arrived. Somehow, Miranda hasn’t quite made the impact many were expecting, her songs perhaps too knotty, too undulating to really connect en masse. Repeated cancellations of gigs – thanks to Eyjafjallajökull – also slowed momentum.

Tonight though, the Dave Sitek-produced originals are bulked out, enhanced by searing shards of guitar noise (the brilliant No One Just Is), or quickened to increase the urgency as on Forest Green Oh Forest Green. If you could criticise the album for feeling like Miranda was being swamped by the production, then live she reclaims the songs, stamping her authority on them.

She’s also at ease when allowing a song to grow steadily, as it does on the lovely Waves, its pretty keyboard melody met by a constant, high-end guitar arpeggio. It’s breathtaking stuff, but it’s thwarted by sound levels that seem to favour her drummer more than her. Her voice is a thing of beauty, but too often it’s lost, and only on a solo cover of David Byrne‘s Glass, Concrete & Stone do we get to hear it at full flight.

The main set is concluded with a previously unreleased track, Pelican Rapids, which builds slowly from a lovely three-part harmony to a frantic, almost Fugazi-esque guitar racket that near enough shatters the library windows in its ferociousness. It’s a heart-stopping moment and one that hints at what’s to come from her second album. On the evidence of tonight’s performance, she may want to strip away the superfluous and stick to ringing every last drop out of her songs. Being reckless suits her, even if being in a library does not.