by Dan Marner
published: 24 May 2010 in Live Music Reviews
Tweet 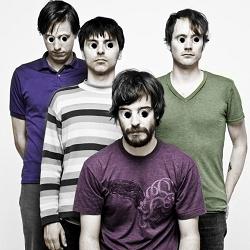 For a venue called Heaven, there is a distinct atmosphere of the underworld in this vast, arched brickwork cavern underneath Charing Cross Station, where the walls themselves are permanently clammy with cold sweat and sordid memories. Tonight’s congregation of hipsters and young Turks are gathering at the behest of, er, Young Turks Records for a workout by Toronto’s current bright hopes Holy Fuck.

Their live reputation is formidable, and the chatter is nervy and excitable. There are two fairly substantial support slots to get through however. Phantom are a duo consisting of a powerhouse drummer accompanying a singer-guitarist’s gleaming, seemingly African-influenced meanderings: not bad, not awesomely exciting, but promising.

The African theme is carried over by the unpronounceable SBTRKT, who comes on in a tribal mask complete with long, white whiskers and proceeds to blow the room away with a complex layering of sample-heavy, old-school electro, at times reminiscent of The Future Sound Of London or Luke Vibert, but with a stuttering, dubby character of its own. His hands flying over his console like the knobs and faders are red hot, he’s more than promising; he’s already a star.

Holy Fuck clamber onstage, a charmingly ramshackle bunch of boffinish slackers, and immediately begin building up an impressive racket, a distorted, echoey organ droning and shrieking under tappity, jazzy drums, elements which rapidly evolve into a thudding, monstrous funk groove. Holy Fuck are often compared to post-rock heroes Battles and it’s easy to see and hear why, but they seem more fixated on feeling and flow than technique, more in search of a good-time groove, less about the process than the actual sound.

Drooping low and banging their heads over a complex array of knobs, wires and switches, the rhythm section insanely tight and muscular, there is also something of Out Hud or !!! about their commitment to creating something that an audience can actually shake its arse to. If anything, it’s pop music for chin-strokers (post-pop?), uplifting, crunchy, straight-to-the-point. They seem to have grasped pop’s greatest assets, repetition and brevity, and none of their numbers outstay their welcome, or get too lost in math-rock noodling.

The sound is downright enormous at times, far bigger and more penetrating than on record, and they appear to delight in taking the odd liberty with their recorded legacy, stretching a drum break here, chopping a digital beat into a glitchy mess there. Songs that can sound dry and perfunctory through headphones are hulking leviathans when unleashed on stage, and it is clear that more than anything this band demands to be heard live. The pieces of the Holy Fuck puzzle only fit when Matt Schulz is unloading wave after wave of kick drum within the same physical space as the listener, Graham Walsh’s keening, wordless vocals sending shivers down the spine. The screaming organs of their noisiest track Frenchy’s penetrates the eardrum with as much force as anything by their partial namesakes Fuck Buttons, the joyous, symphonic Lovely Allen a storming crowd-pleaser, a genuine lighters-aloft anthem.

When they return for an encore, a voice is heard saying “We’re gonna try something” and they begin to improvise a shimmering, click-clacking metallic construction, great shards of howling noise escaping periodically from a thudding, funky bass-and-drums foundation: a single tempo-change later it sounds like Kraftwerk soundtracking a computerised tennis match . The amount of originality and skill on display has been breathtaking, but as the final beeps and scratches boil off and condense on those brick walls, it’s important to remember that it has been sheer, unadulterated fun from start to finish: these boys will never let mad skills stand in the way of something as simple and powerful as a plain, old-fashioned good time.