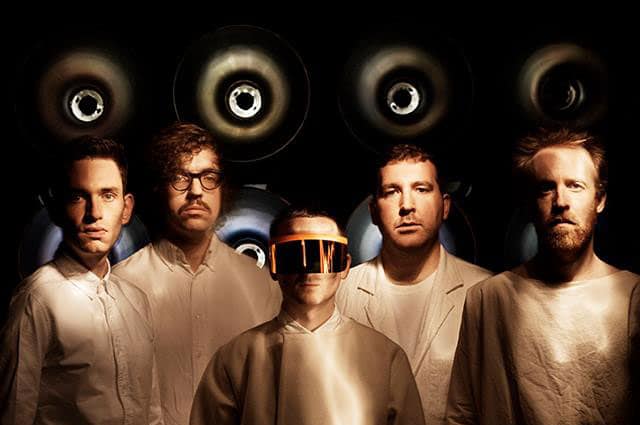 Once artists have reached over a decade in existence, the peaks and troughs of their career to date are pretty evident for all to see. Hot Chip seem to buck the trend; since their playful debut Coming On Strong, they’ve gradually become of the most reliable outfits around in terms of albums output. Even down to their live performances, it’s now reached the point where going to a Hot Chip show is never going to be a disappointment. They are the go-to band for dance music that effortlessly makes you lose control of your limbs. It’s no surprise that this appearance at Brixton Academy in support of new record Why Make Sense? is no different.

On the surface, there isn’t a huge difference between the group that played this exact same venue last time in 2012, but each time they seem to gain more confidence and power as a live band and have developed understated but not overly-done showmanship. From showers of confetti during Over And Over, a song that nearly a decade ago seems like it’s been built to last an eternity, and an astonishingly well done cover of Bruce Springsteen‘s Dancing In The Dark (with a little All My Friends by LCD Soundsystem thrown in) to synchronised dancing during the rapturous Flutes, they know plenty of tricks to get the audience on side.

Even with those elements taken away, what becomes more apparent with each appearance is that their back catalogue is now filled with enough powerful hooks, inventive bridges, eclectic influences and, put simply, fantastic songs to sustain a 90-minute set. This isn’t a complete greatest hits sensation, but it comes close – Ready For The Floor, I Feel Better, One Life Stand a particularly Night & Day all get feverish responses from the sold out crowd. Even deeper cuts such as Hold On and Shake A Fist sound like they could be hits in disguise.

If there is one minor gripe, it is that a some of the material from Why Make Sense? just doesn’t seem to hit the spot. They are still good tracks in isolation, but they come from an album that feels very low-key. As such, Love Is The Future and Cry For You are incapable of reaching the same dizzying heights of the rest of their set. However, Huarache Lights is a stellar opener and Need You Now provides one of the evening’s heavy emotional gut-punches.

Shows like this prove that any truly rough patch in Hot Chip’s career seems unimaginable at this point in time. When they are firing on all cylinders, the results are thrilling and incredibly hard for anyone to top. It also helps that they remain one of electropop’s most down-to-earth units; they clearly revel in performing in front of huge crowds and their delight at being on stage in their hometown is infectious. This is another terrific solidification of their talents.