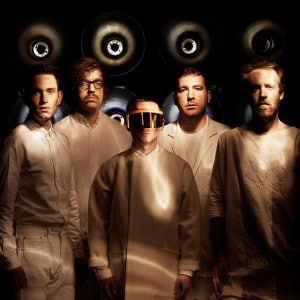 Before it came to house the offices of the Irritable Revenue, Somerset House was once home to the Royal Society.

One of the key achievements of their time at Somerset House was the discovery of Uranus, but the only bum note of this July evening was the sprinkling of ever-so-bloody-predictable rain.

If their august members were here tonight, it struck me that they may have found kindred spirits in the bug-eyed intensity of Hot Chip, not to mention the bug-eyed bug-eyes of Alexis Taylor.

Just in case you missed the last few gig reviews, the inappropriately-titled summer season at Somerset House was in full swing this last July week.

Not being privy to the other esteemed guests, its hard to believe that any possessed the sheer right-nowness of these Londoners-plus-1. So I’ll have to rely on the judgement of my virtual colleagues.

But as the Royal Society would surely observe, the stars are in alignment above Hot Chip just this pop moment.

Skillfully avoiding the staining labels of passing movements like Nu Dave or whatever, Hot Chip may even sidestep that nowness into a prized longevity if tonight and full-flava delights like Coming On Strong and The Warning are just the beginning of a great adventure.

But for the festival-shy and johnny-come-lately-types (like me) who have never seen the Chipsters live, the assumption might have been that it would be as much fun as creating a bar chart on an Excel Spreadsheet.

Maybe all those remix assignments are just a way of goofing off from the day job, of pumping up the volume to stay down with the kids. Or at least the ones that like to stay up til’ six pulling funny faces.

But far from it. For they are not men. They are Hot Chip.

Live, this five-piece wants to rock, rock, rock. And rave on 2 the dawn. And you best believe it, believe it or not muthaluvvers.

Though much of the Hot Chip songbook demands a GSOH from its fans, Alexis Taylor retains perfect pitch throughout.

Whether extolling the virtues of My Piano or dissing Crap Kraft Dinners, Taylor is poker-faced and melancholy as a nervy college fresher who’s dream date has wandered off with the campus jock. He’d cry if wasn’t laughing at the inevitability.

Bravely, and as is their wont, Taylor, Joe Goddard and the rest of their rock steady-ish crew intersperse much of the crowd-pleasers with the promised new material.

The band get the tom-toms out for the lads for a manic Shake A Fist, and the crowd respond with glo-sticks ahoy for a dizzying Time:Delay (I think). Fings are looking good for that piss-easy third album particularly if the mighty guitarist (amongst other ‘tings) Owen Clarke is involved at all.

But just to prove the band know their environment, each backspace into the Hot Chip history file is given a refresh.

Breakdown and Over And Over are pantoned the colour of rave-tent day-glo, but the greyer moments are just as capable of variant shadings.

Shining Escalade smoulders as taut and mist-like as an offcut from Unknown Pleasures. The nod of the head towards everyone’s favourite miserable Mancs is more overt in closer No Fit State.

Though the new intro sounds a dead, doomy ringer for Tubeway Army‘s Down In The Park, No Fit State finally transforms into the trancey-electrochant-along heralded on The Warning.

The band gather round, harmonising on the repetitive chorus. Taylor moves into the centre, alone but for a tom-tom, intoning lines from New Order‘s Temptation like a space-age choir boy finally realising that interplanetary travel is just a fantasy after all.

And he’s trapped here with the rest of us. The Royal Society would understand. I think we all would.