by Tim Lee
published: 9 May 2011 in Live Music Reviews
Tweet 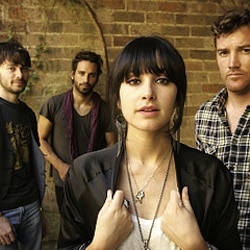 Appropriately enough for a band that, at their best, constructed songs so epic and vast that it felt like you would need an atlas to get around them, Howling Bells seem lost. If Radio Wars was a diversion, this gig seemed to signal the point in the journey where they crash into a tree. And then catch on fire. And then get squashed by a falling boulder. And then they get pulled from the wreckage by some good ol’ mountain boy only to find him unilaterally adopting them to play the part of his porcine life partner. For ever.

They’ve been away for a while, so to have some rusty elements to the performance might be expected. To appear as if you’ve never actually met the people stood next to you on stage is something else.

A rebirth, a chance to introduce the world to new material and convince everyone that the sneaking suspicion the debut was one of those lightning in a bottle moments they would never be able to recapture was a mistake, this sadly wasn’t. The new ones came over as sludgy and funereally paced; lacking in the atmosphere and ethereal beauty which initially made them so many friends. Only one, introduced as Into The Sky, shone through with something: a faint sparkle of seedy faded glamour that suggested that the time they’ve spent recording in Las Vegas might have resulted in the sort of stylistic osmosis that could yet give birth to something special.

Then again, nothing about the gig suggested that this was a band playing at anything even approaching their full glory. Setting Sun was unrecognisable until the chorus. Even then, the dawning was one of shocked realisation – as if the song had been horribly disfigured in a tragic industrial accident and was just making tentative steps towards public rehabilitation, only to be waylaid by people pointing, staring and asking “what has happened to your face?!”.

Yes, Cities Burning Down was still eerily beautiful and Low Happening remains a marvel, but they were exceptional diamonds amidst the rough. However, knowing that this was an off-colour, out-of-time performance could, perversely, prove to be the saving grace, as it makes a complete dismissal of the new tracks difficult to commit to at this stage.

Time will tell. Worryingly, this show didn’t resonate with the confidence of a band about to stun the world with a fantastic third album. It floundered with the unhappy stench of a band tail-spinning into obscurity.