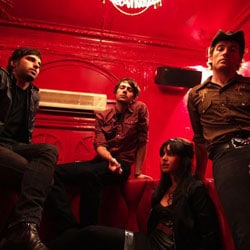 Picture this scene. It’s night, there’s a full moon and you are driving on some desolate highway with no signs of civilization to speak of for miles in any direction. Your head is spinning with issues of love, loss, hope and despair. It’s probably windy, and despite a feeling of intense detachment from reality, there is a certain prick in the air – a sense of urgency and energy which you can’t really put your finger on.

Pretentious bollocks? Perhaps, but you just took a trip into the world of Howling Bells. Equally desolate and comforting, part country, part folk, part Goth. Strung together with a pop sensibility that detaches them from their moodier peers and a live show which builds layer upon layer of other-worldly louche and melodic rock until you’re forced to accept that, even though you are standing in a Student Union, you could be on that bleak highway.

It’s a commonly held misconception that everyone from Australia is a beer swigging sports obsessive, gathered in groups around a barbeque. They can do dumb-rock (think Jet, The Vines), but with Nick Cave, recent highlights Devastations and now Howling Bells, the dark of Down Under shines through.

Tonight they start with The Bell Hit: a bluesy shuffle led by the serene vocals of front woman and co-songwriter Juanita Stein. Her voice has an eerie presence to it, delicate and wistful but at the same time warmed by an Aussie twang. She paints a picture of desolation and loss: “This town’s a mess/ all the doors are knocked down/ all the paintings wear a frown,” to the backdrop to upbeat piano keys and downbeat drums, emphasising what Howling Bells are best at – bleak, yet decidedly upbeat indie soundscapes.

A versatility in getting that message across was the key strength of the band’s eponymous debut album. At times, like on In The Woods or Blessed Night, they nod towards shoegaze bands of the ’90s like Slowdive or Chapterhouse, building a vital energy from close harmonies, driving guitars and mantra like lyrics. At other times they are far more immediate. Wishing Stone erupts into a discordant, reverb drenched guitar riff, Stein almost broods over the lyrics as the drums change from slow building to all out hammering.

But they are best when they mix all their facets together at once. Setting Sun, introduced by Stein (“my song of hope”) has the melancholy beginning, but gathers pace into a chorus that is both musically uplifting and darkly contemplative: “One more day, is not enough to change the world/ but we’ll rise and fall just like the setting sun.” In a similar way, when they cover Dolly Parton’s False Eyelashes, it’s both country disposable and sad simultaneously.

They end on Low Happening, the most immediate track from the album and an example of one more string to the Howling Bells – sex. Stein may be tortured and introspective, the music may be discordant and used to create a sinister pop backdrop, but when the pace rises and the passion kicks in, this, a tale of a broken relationship, is teeming with tension.

And with that they depart, no encore necessary. It takes a special band to be consistent and focused enough to paint an entire attitude and air to their surroundings, whilst still having an arsenal of attention grabbing, perfectly crafted, pop-tinged songs. Howling Bells are clearly very special indeed.