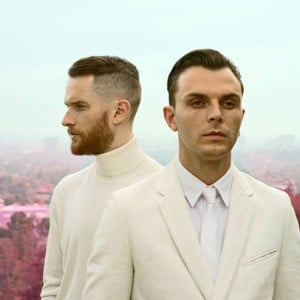 Hurts singer Theo Hutchcraft must be a keen gardener. It would at least explain the plethora of flowers he has at his disposal throughout this intimate comeback gig, billed as ‘some new and some old’.

The roses are definitely new, flung far and wide to all corners of an exultant Scala. Hurts may be preaching to the converted here, but they have the important business of material from forthcoming album Surrender to share – and Theo’s description of it on Twitter as “the beginning of a bold odyssey” suggests the band are not averse to taking some risks.

Not that he or Adam Anderson look at all worried. Rather they look delighted to be back in London (“it’s been a while but you’re as loud and beautiful as ever!”) and it’s only a couple of songs before Theo ditches the jacket, moving in one fell swoop from lead actor of Road To Perdition to a hustler about to get his hands dirty. Meanwhile Anderson, clad in a sleeveless black t-shirt and sporting perfectly tended facial hair, maintains a moodier presence at his keyboard.

On the left side of the stage as we look are gospel singers, who achieve the impressive feat of sending shivers down the spine just one minute into opening track Surrender, their impeccable harmonies reaching for the heights. Then Theo appears, to a chant reminiscent of an Arsenal home game after namesake Walcott has just scored. He wastes no time, setting about his task with gusto and something of a snarl.

Each Hurts song is immaculately crafted, imbued with the spirit of 1980s electro pop but very much for our times. We hear rapturous renditions of old favourites as well as the new material, which sounds very promising. New single Some Kind Of Heaven sets the bar high with its big chorus, while Nothing Will Be Bigger Than Us promises to be the new album’s emotional centre, and found Theo digging deep into his vocal reserve.

Weight Of The World is similarly profound, the song drooping its shoulders but finding strength within a powerful chorus. Hutchcraft lives these songs for all to see, asking for audience assistance at times but baring his soul when the darker underbelly of the material is revealed. Rolling Stone takes more lyrical risks, but the memory that “daddy was an alcoholic” is far removed from a similiar observation by Starsailor some 15 years ago.

It still feels odd to see the group with an acoustic guitar, which Anderson straps on for a sensitively done Blood, Tears & Gold, hollered back at the pair by the audience. Far more idiomatic is Wonderful Life, a stone cold classic presenting its claim as one of the finer pop songs this millennium has heard to date and sending shivers down the spine once again. Ending with Stay was some kind of contrarian flourish, for it is of course now that the audience must go.

With very little padding the gig lasts just over an hour, but with confidence high and songs to match, Hurts look like they’re planning on bothering the charts again in October. Hopefully Theo’s garden is well stocked.

Hurts played: Surrender, Some Kind Of Heaven, Miracle, Somebody To Die For, Rolling Stone, Evelyn, Nothing Will Be Bigger Than Us, Weight Of The World, Blood, Tears & Gold (Acoustic), Wonderful Life, Sunday, Better Than Love, Illuminated; Encore: Stay