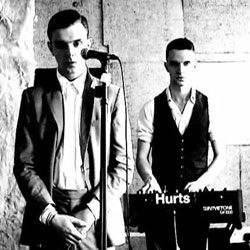 Hurts duo Theo Hutchcraft and Adam Anderson are styled to within an inch of their lives. With their slicked-back hair, Savile Row attire and razor-sharp cheekbones, they could pass for actors in a designer eau de cologne advert. Around singer Hutchcraft’s neck a white silk scarf is draped. Anderson, sat at an electric piano, sports trouser braces. Neither has a hair out of place.

Hurts’ name and their deliberate, precise imagery make bold – some might say pretentious – statements on the band’s behalf. But moody photos, austere black and white videos and references to European literature and disco lento will only get a band so far.

These debut shows, one apiece in Manchester and London, are about beginning to unveil Hurts’ material beyond the obscenely addictive, replete-with-sax-solo Wonderful Life, the only track made available before this year. How many more of that quality do they have?

The BBC Sound Of 2010-tipped duo are joined on the evocatively distressed Wilton’s Hall stage by a synths player, a drummer and an opera tenor in a white bow tie, who take their positions on a second tier as a moody blue light envelops them. There is no superfluous movement from any of the performers; this, of course, makes every move they do make that much more effective.

“Thanks very much, we’re Hurts,” deadpans Hutchcraft matter-of-factly after low-key opener Better Than Love, to no applause. It’s one of the precious few moments in which the band interact with their hyped-up audience, whose numbers include labelmate Will Young.

As with their imagery, so with their stage presence; the message is, the music is what matters. That they have thought through every aspect of their performance and as a consequence take themselves frightfully seriously is obvious, but it’s the spacious, elegant quality of their pop noir writing that makes their audience take them seriously too.

Not everything works. Blood Tears & Gold is the sort of MOR ballad Westlife would tackle as par for the course and is an odd choice for their second video, while opener Better Than Love, in its current guise, doesn’t demand attention as an opener should.

But most of the short set consists of future hit after future hit. Silver Lining’s intelligent structure is expertly balanced with memorable hooks, but when the emotive opera tenor adds marvellous gravitas to the shimmering pop it transforms from radio friendly song to something not far from Soviet-era patriotica. Unspoken is no less epic, a masterclass in building interest and theme to a glorious conclusion.

Wonderful Life’s sax solo and synth arrangements call to mind those similarly elegant men from the early ’80s Spandau Ballet, but Hurts’ songs more generally allow plenty of space for lyrics to be imparted rather than merely sung. They’re in no rush to get through and get done, preferring instead to linger, to consider.

Electing to play out on something other than Wonderful Life, the only track most in the room had heard, is another precisely calibrated statement. Illuminated takes the final spot instead, declaring Hurts are very much more than a one-hit wonder. Playing just eight songs and taking up less than 45 minutes, Hutchcraft and Anderson made good on their arrival, and with it ramped expectations for their debut album up still higher.