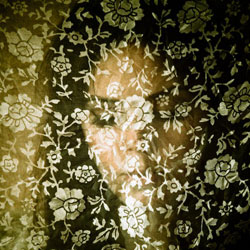 It’s perhaps a little disingenuous to ascribe seasonal relevance to a band just because of their hailing from a country that skirts the Arctic Circle, but, dammit, there’s something a little Christmassy about Swedish shoegazers I Break Horses’ London debut at Cargo.

As befitting a band as studiously aloof as they are, they don’t go the whole hog and decorate their Moog synthesisers with tinsel, and elfin lead singer Maria Lindén is (perhaps unreasonably) not sporting a green jumpsuit/hat combo. But their warm, hazy soundscapes seem to glow with the frost of a thousand breaths caught in the air, and the bar would probably have done a roaring trade in mulled wine were it not, frankly, a terrible idea to give 300 tipsy music fans boiling hot liquid to spill over each other on the way to the toilet.

I Break Horses’ record Hearts was one of the standout debuts of the year, at once totally in thrall to both the icy Scandinavian electronica of old and the more blistering, heart on sleeve shoegaze of My Bloody Valentine and The Cocteau Twins. That the duo (singer Lindén and knob twiddler Fredrik Balck) made it sound fresh and beguiling was to their eternal credit – it sits comfortably alongside American break-outs Washed Out and Toro Y Moi in the nascent chill-wave (or Glo-Fi) scene.

Everything seems to have happened incredibly fast for the group, and it’s a little unfortunate that we find them still finding their feet as a live act on what is only their fifth or so show. The duo now hastily expanded to include guitarists and a drum machine-worrier, the opening Empty Bottles, so textured and complex on record, is completely swallowed up by a huge blast of reverb and drums mixed so high it’s almost impossible to tell what’s going on. Lindén’s vocals, admittedly already pretty indiscernible on the album, are completely washed out, and the group struggle to drag the concert back round from a rather inauspicious opening. It doesn’t help that, to the untrained ear, many of their songs are tonally pretty similar – and even when Wired, a Jesus and Mary Chain-style foot stomper, follows it everything feels muddy and beset by nerves.

For Lindén, stuck at the back of the stage, it must be a terrifying experience – the duo met through an online forum for hypochondriacs – but they soldier on and with each passing track the group seem to relax and grow into the sound, and by the closing one-two of the group’s best-known tracks, Winter Beats and the swooning, rasping Hearts, they seem to be actively enjoying themselves. That track in particular manages to convey the shimmering, ethereal beauty of the record very effectively, but also adds a certain bite to the pounding outro – showing the group perhaps have just as much of a future outside the studio as in.

You can’t blame them for not quite ironing out the kinks in their sound after being thrust into the spotlight over such a short period of time, and there’s certainly a muscular beauty to revel in in their live show, perhaps given a few more outings. Santa hats next time, though, please.