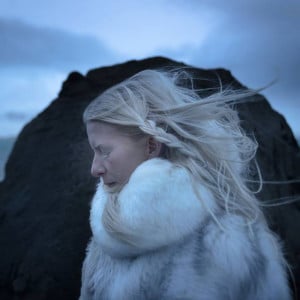 Concert In Blue, the second online live event by Swedish audiovisual pioneers iamamiwhoami, had extraordinarily big boots to fill. The previous event, 2010’s ‘in concert’, took place in a Swedish forest around the break of dawn and was filmed with a determinedly guerilla feel.

While undoubtedly rough around the edges, the ‘installation’ was armed with a riot of blazing ideas that imaginatively utilized the natural environment: a synchronized light show of glowing tents, burning the single audience member (a fan ‘chosen’ by the fan community) in a fort of cardboard boxes before singer Jonna Lee wallowed in the ashes.

Meditation on the nature of the relationship between artist and fans is thrust even more into the conceptual heart of this concert and last year’s (third) audiovisual album Blue. That work’s visual motifs of ocean and shore were often disappointingly trite in the video series, but work much more profoundly in concert as large projections, waves churning behind Lee’s poses.

There is no doubt she is a magnetic performer in all her ugly/beautiful oddity, deserving of a bigger platform for what she does. And there are technical achievements in this concert that, despite the staginess and dubious ‘live’ credentials, have created a slick, visually rewarding piece. Yet this all needs to be assessed in the context of a still unfolding, potentially brilliant career.

The extraordinary creative momentum of the first two series of songs and videos was genuinely innovative in an era where that term is bandied around too sloppily by media and PR alike. This is usually done in the hopes of creating aura around product that it solid, but that is not particularly innovative when analyzed more cooly (hello Beyoncé). The difficulty for iamamiwhoami was always going to be maintaining that momentum, and the sense is in the current era that we are rapidly flatlining into blandness. The artist/fan relationship has been turned here into a celebration, a cosy love-in, rather than the insightful dissection of the dynamic that might sustain this project into the future.

Intriguing cutaways during the concert to segments filmed in a white room, where photos of fans flicker across a computer screen, finally give way to the main event: projections of fans lip-syncing to the songs being performed which first cover her dress in Blue Blue and finally take over the rear projection screen in Shadowshow, split so that Lee can emulate their performances on the other half. While this had entertaining moments (and you could feel the collective squee emanating from the internet as it unfolded), new supporters are unlikely to be attracted. Although perhaps that is the point.

Having attracted a relatively small, but fiercely dedicated audience, the game plan now seems to involve holding onto them by deepening the relationship (and monetizing it). Put simply, if Jonna Lee pandered to her fans any more, she’d be making them a packed lunch every day. Perhaps this is just symptomatic of the way that pop careers must now be sustained. ‘Making an album about the relationship with your fans’ and turning it into participatory live events is perhaps the new ‘making an album about being on tour, because that’s all you’ve been doing for two years’. However, the worry for Jonna Lee is that she has walked into a mirror-lined blind alley, one that, long-term, is not going to serve either herself or her fans particularly well.