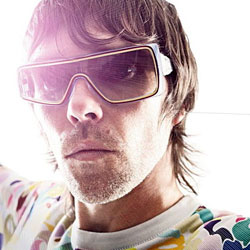 Love him or loathe him, as the title of his new album suggests, Ian Brown has always done it his way. While for some he represents more attitude than talent, his inspiration for the Britpop generation and beyond means you cannot ignore him.

Brown’s uneven sixth solo album My Way encapsulates his patchy post-Stone Roses career: while it has some good tunes and cool grooves, ultimately it fails to satisfy. His live performances are similarly mixed, but he was on good form to celebrate his 10th solo gig at Brixton Academy.

Looking remarkably fit and lean for a 46-year-old, King Monkey was clad as usual in dark-blue jeans, white T-shirt, trademark black Adidas tracksuit top (is he getting commission?) and shades. As he ages, he seems to become increasingly simian in appearance and movements, many of which are imitated by his adoring fans – how more monkey-like can you get? He may never have been the greatest of singers but his on-stage strutting charisma remains strong.

The tambourine-waving Brown was backed by a five-piece band, including an excellent tabla drummer, as they put on an entertaining 90-minute set. The man himself was very relaxed and surprisingly chatty, even if at one point he got the wrong name of the venue.

Seven tracks from My Way were played, including the electro-dance Own Brain (an anagram of his name – nothing wrong with Brown’s ego) and the compellingly rhythmic Marathon Man, which had him running on the spot.

However, it was noticeable that it was the older songs that received the strongest response from the audience. The funky Love Like A Fountain and techno-influenced Golden Gaze got people dancing, while the distinctive Spanish trumpet intro of one of his best songs, Time Is My Everything, raised a cheer of recognition and F.E.A.R. prompted a singalong chorus.

For Sister Rose, he was accompanied by two female dancers, plus Naoto, guitarist with indie-pop band Orange Range and, according to Brown, “the biggest music star in Japan”, though he made no discernible impact in Brixton.

In typical foot-shooting mode, the haunting early single Corpses In Their Mouths was given an unconvincing political spin when he introduced it with an anti-BNP statement which managed to be sexist at the same time: “One thing that gets my goat is a racist girl, that’s the worst thing in the world.” Why is a racist girl worse than a racist boy, Mr Brown?

The encores began with a rather embarrassing a cappella version of the Stone Roses’ Elizabeth My Dear which revealed Brown’s vocal limitations, but was followed by a brilliant account of the classic Fool’s Gold. It’s a shame it didn’t end there on a high, but last up were the two so-so singles from My Way, Stellify and Just Like You.

While some of his musical decisions may be questionable, Brown’s showmanship is assured. With John Squire having given up music for painting, there seems little hope of a Stone Roses’ reunion in the near future – but Brown seems perfectly happy to do his own thing anyway, and no one does his thing better.