by Tim Lee
published: 13 May 2018 in Live Music Reviews
Tweet 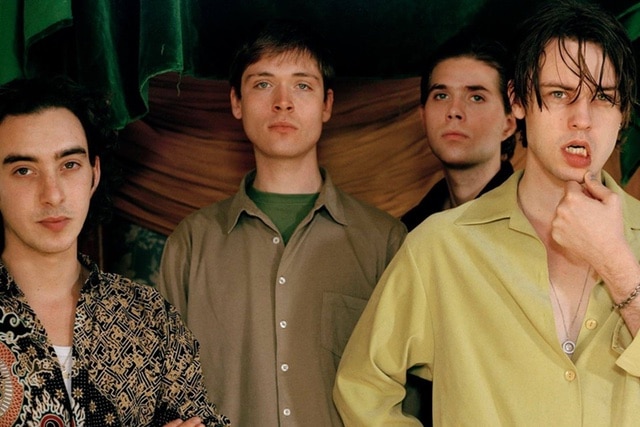 There are many reasons to like Iceage. The fact they are wildly compelling live is a good one, but one which does warrant some unpicking. Because, they don’t really do very much as performers, per se. So, post the event, it’s hard to recall why it was so compelling, even if you’re in no doubts that it definitely was.

Tonight, there’s one fairly low-key stage dive by frontman Elias Bender Rønnenfelt, during Plowing Into The Field Of Love, the fairly low trajectory not aided by the small lift the stage at the Scala offers. But other than that, there scant in the way of specifics. There’s the recurring image of Rønnenfelt swaying, vaguely Byron-esque shirt flapping, as he winds himself up for another guttural barrage, but it’s more impressionistic than expressionistic.

Not that this is suggesting Iceage would be a better band or live act if they introduced more histrionics: if guitarist Johan Surrballe Wieth complemented his playing with a flamethrower mask; if Dan Kjær Nielsen spent half the set drumming upside down; if Rønnenfelt crowned the encore by flying into the audience on the back of a tiger, say.

Certainly, it’s hard to image a more impassioned response. If the band are mostly static, the crowd are hyper-kinetic. Circle pits form early, beer flies, fists pump and the response to everything – be it the brassily fantastic Pain Killer from new album Beyondless or a super-taut, super-brief Ecstasy from 2010’s You’re Nothing – is greeted with rapture and sweat. It is an interesting demonstration of presence. Of a band having ‘it’, the indefinite platitude which is nigh on impossible to explain and incredibly obvious to spot.

Of course, the other really good reason to like Iceage is the fact they are, with an efficiency and a single-mindedness not often seen in the current age, making records which are both very good and consistently evolving. Beyondless, their fourth, is another step onto new ground. A lot of it gets an airing tonight. Take It All marches forebodingly against a backdrop of martial drumming. Catch It is droningly malevolent, Venus In Furs in Copenhagen, while the la-la-las of Plead The Fifth are wonderfully Stoogian in their construction.

It’s a perpendicular point at best, but another appealing thing about Iceage is the promise of where they could eventually go. Many have remarked on the musical similarities to both The Birthday Party and Nick Cave & The Bad Seeds, and they are here albeit alongside myriad others, but there’s also parallels in terms of the artistic arc taken.

From white-knuckle, teeth-bearing punks, to grandiose, cinematic songwriters. From guitars and drums to fiddles and saxophones. From brutal nihilism, to despairing romanticism to… whatever comes next. The here, the now, the eventual. There really are many reasons to like Iceage.